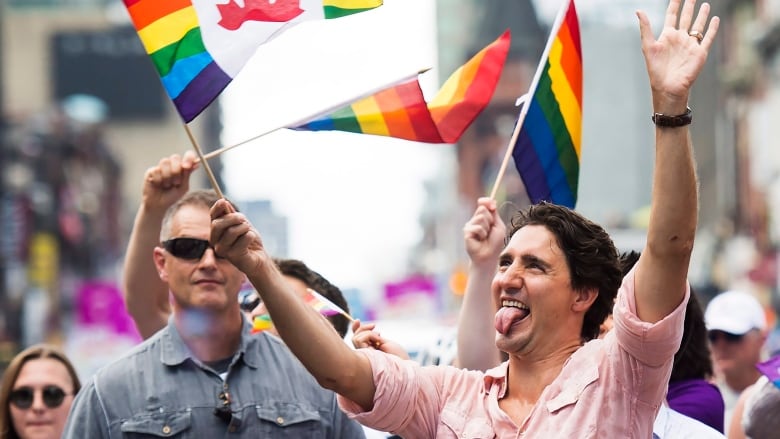 The Conservative’s slogan is consistent with their standard platform of low taxes and small government, and plays into the party’s past attempts to brand Trudeau as a privileged pretty boy who is “not as advertised.” On-going scandals, including a conflict of interest violation, and a family vacation to a private island owned by the Aga Khan (on the taxpayers dime), are among the more common jabs trotted out to drive their slogan home.

The Liberal’s 2019 slogan is also consistent with what they pitched during the 2015 election campaign, which characterized Conservative policies and values as anti-Canadian. On this point Alex Marland observes:

The liberals brain trust has obsessed with projecting an image of leadership that is the antithesis of the Conservative command-and-control approach. The Trudeau brand is built on message themes of transparency and a respect for institutions, wrapped in amorphous leanings towards policy centrism and a yearning for publicity (Brand Command, xviii).

Unlike in 2015, however, where the Liberals could point to nearly 10-years of Conservative rule under Stephen Harper, and their increasingly reliance on divisive identity politics (e.g., see my piece on the niqab affair here), they are the incumbents this time around and thus have to rely on the public’s fading memory of their political nemesis.

In a recent campaign ad, Trudeau is pictured riding on a crowed bus, reminding his audience that, “When we raised taxes on the wealthiest 1% so we could cut them for the middle-class, they [the Conservatives] tried to stop us.”  The same goes for the Canada Childcare Benefit, and action on climate change. As the ad comes to a close, Trudeau lays out the “choice” that voters have in no uncertain terms:

In October, we’ve got a choice to make. Keep moving forward and build on the progress we’ve made, or go back to the politics of the Harper years. I’m for moving forward for everyone.

Last week the Liberal party machine took things a step further by resurfacing a video from 2005 of a young, newly elected Andrew Sheer speaking in opposition to gay marriage. A few days later they released another clip suggesting that Sheer had told anti-abortion activists that he would reopen debate on this issue by allowing his MPs (Members of Parliament) to speak out on the matter, and put forward motions in the House of Commons. At present it is not entirely clear just where his party stands. Sheer quickly tried to squelch the gay marriage issue, however, stating that he would not reopen the matter for debate, while adding that several Liberal MPs were also opposed to legalization at that time .

Despite the uncertainty around whether Sheer would allow members of his party to reopen debates on abortion, it is not a popular issue in the country, and any initiatives to put forward restrictions aren’t likely to go very far.

As I was combing through these narratives over the past week or so, I was stuck pondering whether the Liberals had a strategic end-game in mind, or if they were merely digging up dirt in hopes that other stories like this might come to the surface? While more scuttlebutt remains a possibility, this issue has certainly taken attention away from the Liberal’s own tarnished image, which was (likely) their primary aim.

Reading through Asad Haider’s book Mistaken Identity: Race and Class in the Age of Trump (2018) for an upcoming class this week, I came across a passage discussing Wendy Brown’s 1995 book States of Injury: Power and Freedom in Late Modernity, where Haider writes (invoking Brown):

[W]hen the liberal language of rights is used to defend a concrete identity group from injury, physical or verbal, that group ends up defined by its victimhood and individuals end up reduced to their victimized belonging.

This strikes me as a useful theoretical insight for thinking about how liberal states like Canada attempt to perform a certain type of public virtue and present it as an embodiment of national values. Since the force of public sentiment has clearly tipped in favor of gay marriage in Canada, Sheer’s personal views on the matter and those in his ranks can only be presented as privately held beliefs, while support for basic rights must be affirmed. He even went out of his way to note that the previous Conservative government had sought to protect LGBT refugees fleeing from countries like Syria and Iraq. This line is consistent with what Jasbir Puar has termed homonationalism, referring to the tendency within liberal states to tote their nation’s tolerant policies as a way to characterize other parts of the world as backwards and intolerant. 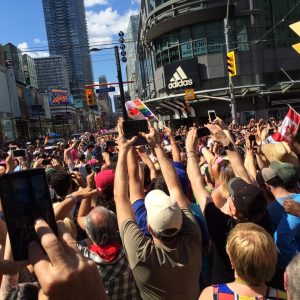 Trudeau, for his part, is able to lean on his bona fides as a queer friendly Prime Minister (see my photo, right, of a barely visible Trudeau at the Toronto Pride parade, 2016) as a part of his wider brand appeal as a young progressive leader who is hip to the times. In both cases however, the discourse on Canadian values defers to the “liberal language of rights,” and, as Haider observes, functions to overdetermine certain groups by their “victimized belonging.”

Here it is worth pondering what broader effects the discourse of legal rights has on conceptions of national identity–in terms of what it promotes outwardly to the world,  and in terms of what it conceals? Relatedly, to what extent does the narrative of “victimized belonging” impact the ways in which marginalized groups, such as LGBTQ communities, internalize their own identities in relation to the nation-state, and, in turn, contribute to how they construct their own discourses in response?

*The title of this piece is a riff on a Simpsons episode, where a caricature of presidential candidate Bob Dole stated at a campaign rally, “abortion’s for some, miniature American flags for others!” This compromise position seemed to appease the crowd, who finally cheered his proposition after previously booing his pro- then anti-abortion statements.