The issues are so central to what we, here at Culture on the Edge, have been discussing that we’re really quite pleased to post this two-part exchange. (Read part 2 here.)

Culture on the Edge: According to news reports your band, The Slants, has been granted a unique opportunity, basically to appeal the appeal that you recently lost at the Federal Circuit Court (i.e., the original decision was vacated), all in an effort to register the band’s name with the US Patent and Trademark Office; specifically, the new appeal will test whether the section of the law that denies brand rights for anything judged “scandalous or immoral” actually undermines what we today mean by freedom of expression, correct? But is it fair to assume that when you first started out to trademark your band’s name and thus its brand, the furthest thing from your mind was taking on the US government’s 1946 Lanham Act?

Simon: No artist begins their career thinking about how to dismantle laws that they aren’t even aware of and I’m certainly not an exception. When I first began the band (with name in tote), the intention was to take on stereotypes about Asian Americans, inject pride into our respective ethnic heritages, and increase visibility of our community in the entertainment industry. In fact, we remained fairly a-political at the start; it was mostly about visibility. However, as we started getting some notoriety, a few key things happened. First, Asian American youth started writing us, telling us how much it meant to them that we were around and how they loved our name since it gave them a point of pride for something they were often ashamed of. Second, we started getting involved with panel discussions about Asian Americans in entertainment, which led to further panels and workshops on race, identity, and equity. Over time, we became increasingly involved with social justice issues, charitable causes, and advocacy as well.

Near the same time, our attorney recommended that we get a registered trademark on the band’s name, something commonly done by artists to protect their brands. Little did I know that it would lead to a legal battle lasting six years and counting. Now, we will be presenting our case before the Court of Appeals for the Federal Circuit, and, as you mentioned, to discuss the constitutionality of Section 2(a) of the Lanham Act. We’ve expressed our disappointment that isn’t allowing for a more nuanced discussion on the role of identity but I’m looking forward to the possibility of expanding freedom of expression rights as well as being able to explore what those actually mean in the country that boasts of “free speech.” 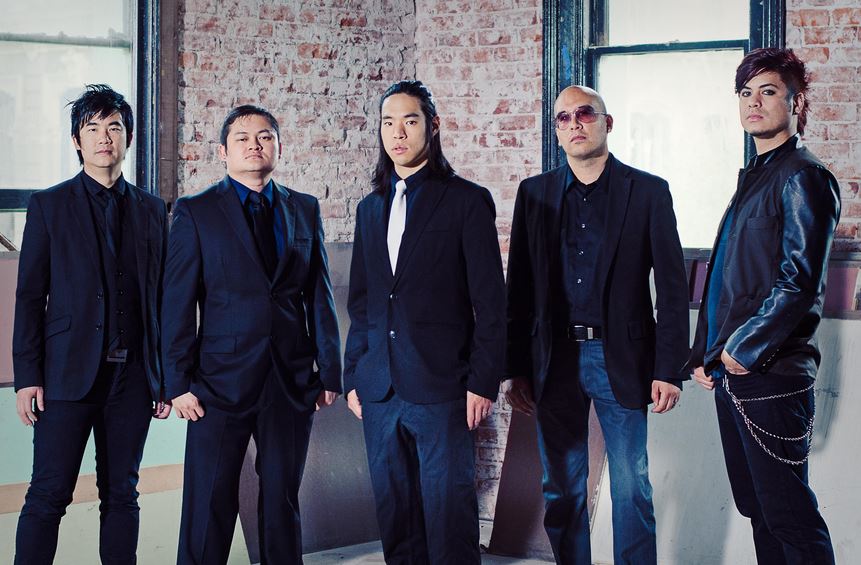 Re-appropriating self-designators that were once seen to be derogatory has a rich history, of course, but we wonder if there’s any generational differences you’ve found in canvassing supporters for your legal challenges. In other words, while we’ve seen the N-word revived in some parts of African American popular culture, for example, or while such terms as gay, dyke, or faggot have been successfully re-signified, the terms are not always without controversy, even among some members of the very communities within which their re-appropriation is taking place. So have you found that there’s a generational element to those who work (or choose not to work) alongside your efforts to re-brand the term “slant”?

Simon: Originally, there was an assumption that any disagreements with our use of the name would be divided on generational lines. However, research found that this wasn’t the case at all. Not only have we performed for internment camp survivors and Chinese and Japanese elders in our community, but older Asian American activists have been among some of our strongest supporters as well. Perhaps that’s because they were stripped of their ability to self-identify. In fact, the term “Asian” was only brought on due to the census – prior to that, our respective communities simply labeled themselves by their nationality or respective ethnicities. Once “Asian Pacific Islander” was adopted, it was specifically for empowerment through the unification of marginalized communities (especially in the wake of Vincent Chen’s murder).

Additionally, in 2010, we hired an independent group of researchers to take a survey about how Asian Americans felt about “The Slants.” It was specifically for our trademark case and submitted as evidence to the US Patent and Trademark Office. In it, researchers discovered that 92% of Asian Americans across all generations were in support of our use of the name. There were no statistically significant differences between generations, income levels, education levels, or geographic areas.

Discussing the trademark and patent case, the band’s website says:

Given that a non-dominant group’s identity is often created for them by others who are in power (inasmuch as a group’s legal limits are created by those who make and police the laws—pretty evident in your case), could you describe what you think the government’s sense of an Asian, or more specifically, an Asian-American, is? What are the preferences, commitments, and long term interests of people who constitute this group—at least as you imagine the government sees it? And how, again in the eyes of the government’s lawyers, do the members of The Slants (and those Asian Americans who support your case) apparently deviate from some idealized notion of Asian American identity?

Simon: I imagine that there are different levels of awareness within the government, with certain sectors having a better understanding of Asian American identities than others (especially those who are of that ethnic identity). That being said, I can speak to a few things about how our government treats the community on a broader level.

First, there has been this perpetuation that Asian Americans are a model minority – in other words, that our community excels in terms of education, health, finances, and more. This has been backed by widely criticized government research, mainly because the data fails to account for the variations within specific ethnic communities, creating significant harm and inequity. Second, Asian Americans have suffered throughout the past two centuries from overt racism, including laws that have specifically targeted our group. This is a history that is often not taught in schools and the government fails to recognize how it has created generational issues such an inherited social inequity. Third, the very definition of Asian American has continued to evolve over time – only in recent years, were South Asians included. There are no scientific reasons, simply geographical ones and social constructs as to who is considered “Asian American” and who is not.

Regarding our case, the Trademark Office doesn’t seem to single any faction of our community specifically – not ethnically, nor socially. They only claim that a “substantial composite” of the community finds the term “THE SLANTS” disparaging. The problem is that they didn’t find any actual Asians; they only found anonymous internet entries, authors of which didn’t even self-identify as Asian American. So I don’t believe that they see us as a deviated version of Asian Americans – there’s a substantial track record of Asians using the term “slant” in a positive, self-referential manner. Rather, I think that due to fears of the case being politically controversial, they rejected our application, even to the point of using our own racial identity against us as the primary reason for denial.

Part two of this interview
will be posted tomorrow.