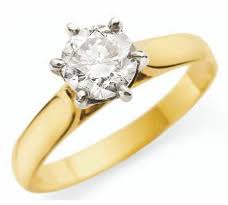 When I got engaged twenty years ago, my then-boyfriend purchased me an engagement ring that looked very much like the one above. While both of us were from working-to-middle class families, it was a well-known custom in our corner of the world (as it remains in many places) for men to save up months and months of their salary – even perhaps selling things of considerable value – to procure a ring deemed suitably large, beautiful, unique, etc. for their brides-to-be. Despite the fact that I might do things differently now, at the time it never occurred to me to question this process.

However, several years later, when I was in graduate school and living on the other side of the country, I distinctly remember the day that my ring became a topic of conversation amongst a group of friends. None of my peers had a ring that looked like mine; many of the other women who were married donned only a simple band – no diamonds – if they wore a ring at all. So when the talk turned to my ring, I was ill-equipped to explain the questions that I got: Why, exactly, had socially aware people like us bought something like this? Did I feel that it was worth it? Did I have any regrets on spending that much money on a piece of jewelry?

As I was in the middle of feeling particularly conspicuous, a friend (also from the same part of the country where I was raised) chimed in that rather than presume that I was aware of all of the social dynamics behind engagement rings, perhaps it would be more useful for us to think of it as a “cultural thing,” for she, too, understood that it was something you “just did” if you were from a particular place and belonged to a particular socioeconomic bracket. As future professors, the “culture” explanation seemed to appease almost everyone trying to make sense of my jewelry, and yet that response to why people do what they do (“it’s just a part of their culture”) is a blanket answer that, while frequently employed, resolves almost nothing at all.

It’s entirely true that the value that a culture places on certain things and ideas is driven by the power structures that, themselves, organize that culture; with that in mind, I could provide a lengthy discussion on the commercialization, sexism, and commodification of American heterosexual courtship rituals. But what this particular moment also reveals to me is the intriguing way that we scholars often discuss the constraints of culture. I assume that most of us would agree that we cannot escape being members of a culture, nor can we presume that we are all conscious of the power dynamics that fuel the cultural markers upon which our own identities are crafted. But what I was particularly aware of during that night’s discussion was the fact that no other aspect of our surroundings, appearances, etc. were subject to the same sort of critique. As I remember the moment, the conversation took place in a home with nice furniture, wonderful original art, and during a fantastic meal. None of those things, however, counted as things worth asking “was it worth it” and “why did you buy it,” for their value was taken for granted — they had, in other words, escaped notice as an artifact of culture.

This is not to say that conversations on the worth of diamond rings aren’t important to have. But I am suggesting that those things subject to cultural critique often have intriguing parallels elsewhere that we conveniently overlook, a phenomenon of incredible importance to scholars of identity. For instance, I didn’t ride on an airplane until I was well into my teenage years, and only after I won a contest that funded my travel (my family didn’t have the money for vacations for most of my childhood). Today, I have already spent more money on my three children’s (aged 10 and under) airplane tickets than my wedding ring costs, and yet I hardly suspect that few would question that expenditure.

So what this reveals to me, as a social theorist, is that the unspoken valuations that surround our cultural objects and ideas are just as much our data as those things themselves. It’s all about the stories we tell, in other words – is a ring a consumer-driven bauble or an heirloom token of commitment and love? Is art a petty expenditure with little practical value or a critical window into the very aesthetics that make life worth living? What this suggests is that talk of the value of an engagement ring as an example of culture is itself an act of culture.

One Reply to “Diamonds Are A Girl’s Best Cultural Symbol”