I often ask my students to consider what the world would be like if we asked a different set of questions about it. Usually that results in some puzzled looks, for it’s hard to think of different questions precisely because it’s hard to think about a different sort of world. This is, after all, what Pierre Bourdieu was getting at when he described our social lives as “habitus,” or the series of preferences, dispositions, perceptions, and other taken-for-granteds that we think are relatively unique to and comprise our individuality, but that really describe large swaths of our given culture that, bit by bit, shape us into who we are.

If you caught Russell McCutcheon’s post yesterday, you’ll know that he presents a strong case that, for those of us interested in critically analyzing the world, examining the politics of classification — that is, how others describe and categorize the things, people, and events around them — may tell us more about how society works than any of our own attempts to create new versions of these classifications. As McCutcheon describes it, coming up with a new definition of religion may appear to be an intriguing scholarly move, but it still replicates a series of presumptions (specifically, regarding the nature of religion) that typically go unnoticed, and that thereby actually reveal nothing new insomuch as they simply re-create what already was.

This is why this most recent meme (above) of Ruth Bader Ginsberg caught my eye, for what I am often reminding my students is that if they want to ask a different set of questions about the world but don’t know where to start, perhaps they would be best off by considering the power dynamics that caused the question to be interesting in the first place, and then reversing those dynamics to see what new questions result. By doing this we’re not necessarily interested in what new answers we may find (although that could be fruitful, too), but more in exposing what sorts of unspoken assumptions remained veiled in the classifications that underscored the original question.

For example, consider how the questions that inspired two of the signs (center and right) held by the people below are reversals of questions that would otherwise seem very mainstream, but when spoken from a different perspective, shed light on the politics of the phenomenon in question: 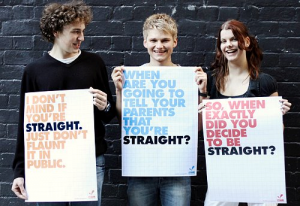 Also, consider the recent controversy over comments made by U.S. Supreme Court Justices Antonin Scalia and John Roberts, wherein both questioned the value of racial diversity to the higher education classroom. While Scalia’s more openly controversial comments disparaging the academic abilities of minority students received more attention, it was Roberts who asked “What unique perspective does a minority student bring to a physics class?” as a way to judge whether there was actual value in creating diverse classrooms. 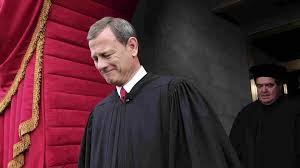 Several observers were quick to respond directly to this question (including this article attempting to demonstrate that diversity makes us all smarter), and yet others — including black female astrophysicist Jedidah K. Isler — took a more critical approach in interrogating the merit of Robert’s original question. In her essay, Isler scrutinized the very logic by which Roberts’ comments were made by asking when and how white students where ever held accountable for the unique perspectives that they bring to the classroom. Isler rebuts the spirit of Roberts’ question by noting that “Black students’ responsibility in the classroom is not to serve as ‘seasoning’ to the academic soup.”

Indeed, the power relationships that animate our social worlds are often exposed not just in the questions we ask, but in the very categories that make those queries possible. Rather than think that double standards are an anomaly or some sort of momentary hypocrisy saved for the politicians and lawyers, it’s important to remember that they remain effective — and yet ubiquitously mundane — strategies of rhetorical power.

2 Replies to “When the Question Matters More Than the Answer”