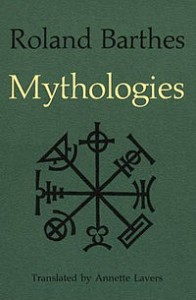 I remember standing in the checkout line at the campus bookstore with my copy of Roland Barthes Mythologies. I admit that I was suspicious of any book supposedly so profound that was also so small. Its size is deceiving just as much as its structure is unique: the first part of Mythologies is comprised of a series of short essays that provide the pop-culture exemplars of Barthes’ theory on how mythmaking operates (covering everything from food to clothing to politics), while the latter half is comprised of a theoretical essay – entitled simply “Myth Today” – that more overtly addresses the workings of this type of semiotic turn. Barthes rejected common definitions of myth that equate it with “falsehood” or “the stories that dead people believed.” Rather, Barthes understood myth as an absolutely ubiquitous process that involves the transformation of “history into nature,” or, put differently, the manner in which otherwise constructed things are made to appear natural or inevitable.

I was introduced to the book’s main premise at a time when I was just beginning to wrestle with the notion that reality is nothing other than a construct, and this is why I hold it in such high regard now as a critical work in my own scholarly development. Like other new graduate students, I could adeptly explain how reality has culturally-constructed elements, but I was simultaneously attached to the idea that under the constructs lay buried some true essence waiting its timely discovery.

So when I read Barthes for the first time, I was arrested by the notion that perhaps most everything people believe to be natural or true is a reality generated through processes of rhetorical manipulation, made ubiquitous by a series of powerful (and popular) emotions that dominant sub-cultures are usually quite eager to believe. Barthes argued that naturalization is essential to the larger task of mythmaking itself, for most of the messages that we receive in our daily lives are a series of individual symbols enmeshed with one another in ways that appear inevitable but that don’t necessarily have any automatic relationship.

So while something as simple as, say, a Band-Aid doesn’t appear to have anything to do with mythic speech, if we carefully consider the fact that the “flesh” coloring of Band-Aids is a color that only blends in with a very pale sort of skin, we can see how even the choice to dye band-aids on the pale-Caucasian end of the spectrum is itself a message about what kind of skin color is “normal,” thereby turning the Band-Aid into a political tool.

While many of us who do culture studies find it almost second-nature to identify instances of privilege such as this Band-Aid example, what Barthes provided for me was the overt theoretical grounding through which to make sense of how such privilege works, and perhaps most importantly, why its supposed “inevitability” is so persuasive to the general public, even to those who might be harmed by the associations that it draws.

One Reply to “You Are What You Read, with Leslie Smith (Part 1)”