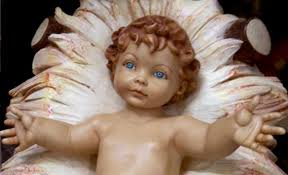 What’s in a name? Well apparently a whole lot according to one judge in Eastern, Tennessee, Child Support Magistrate Lu Ann Ballew, who not too long ago, ruled (while the parents were in court for not being able to agree on the child’s last name) that a 7-month old baby boy named Messiah, name be changed to “Martin,” arguing that only one person is deserving of such a name and “that one person is Jesus Christ.” The mother of the child, Jaleesa Martin, is appealing the decision.

Although “Messiah” topped the charts as one of the “fastest rising baby names in 2012,” Ballew argued, “It [Messiah] could put him at odds with a lot of people and at this point he has had no choice in what his name is.” She added that the name Messiah puts the child in geographical danger because Cocke County, where the child lives, is largely “Christian.”

What’s interesting about Ballew’s argument is that in conjunction with reading her own religious anxieties and moral panic into the naming of this baby she, using the signifier “choice,” takes a rather curious approach to “naming” when she states that the child’s identity vis-à-vis naming should not be interpellated before the child can choose for themselves what it is that they’ll want to be named (for theorists have long pointed out the quagmires associated with the tension between interpellation and “choice” and “non-choice). She seemingly holds in tension a rather confessional, hegemonic and conservative view of naming then strategically makes a postmodern move in her argument to secure her own projected anxieties onto the subjectivity of the child (thus, appearing to take the side of an innocent child, who can’t yet freely “choose” in the world).

Theorists of identity might suggest that Ballew already misses the mark when she assumes that the interpellation of the child’s identity hadn’t already begun (before the “naming” of the child) with the pronouncement of the sex of the child at birth, and even before. On this point, Judith Butler argues that, “the medical interpellation which shifts an infant from an “it” to a “she” or a “he,” and in that naming, the girl is “girled,” brought into the domain of language and kinship through the interpellation of gender” (Bodies That Matter, 7).

On the grounds of “religious freedom,” many are suggesting that the judge’s Christianist impositions from the bench are skewed and incorrect – arguing that she is wrong in her position that there is only “one” Messiah, and that there have been “many” Messiah’s over the last 2,000 years.

This story nicely illustrates the manner in which meaning and human interests is/are often read into empty signs and signifiers of identity, like naming, while the details and events of this case point towards the sorts of “operational acts of identification” that Jean Francois-Bayart so poignantly demonstrates in his work.

Citing “Jesus” and obscuring her concerns over the “Christian” narrative somewhat under an empty concern over “choice” on behalf of the child (which she in part uses as her defense), Ballew assumes she gives choice/agency/identity back to the child by taking away the parent’s right to choose a name for their child and then renaming the child a new name (Martin) that neither the parents nor the child has “freely” chosen.

At stake here is not “identity” per se, but rather, a protectionist preservation of a particular narrative made religious of a particular social actor in a very particular historical moment whose identity has been made unique, stable, transhistorical, unchanging and universalized – of course in a very local sort of way.