This month, I had the honor and privilege of delivering the endowed inaugural Day Lecture (in honor of Zachary Day who was a religious studies major at The University of Alabama before he passed) on religion in popular culture for the Department of Religion where scholar of religion Russell T. McCutcheon is currently Chair. I was struck by and in awe of the intellectual energy there among students who major and minor in religious studies. Not just that they were studying religion, but how they were thinking about the academic study of religion in their own specialties of interest. As someone who has spent the last three years teaching religion on both the undergraduate and graduate levels, and very much interested in the ongoing conversations regarding the “crisis” in the humanities and “decreasing interest” in fields such as religion, it strikes me that getting students to see the utility in and broad possibilities of something like the academic study of religion might rely upon how we as scholars, or departments, for example, demonstrate not so much what religion is but how studying religion might assist in exploring a wide variety of data in the social world – such as claims to identity and difference. The latter, in part, relies upon how we both mark (and market) the academic study of religion, perhaps away from a static and self-evident “thing” (over there) towards a notion of religion as more of an “anthropological enterprise” – a social process – a human doing and making.

Such distinctions and nuances might seem subtle (and petty) at first glance, but are, I believe, vital for how the world, potential majors and other academic fields register what exactly the academic study of religion is and does (especially for the student wondering “what can I do with a religious studies degree?”). Such confusions exist not only among potential majors and minors, but also in the larger field of study. I often find myself getting uptight (and offended) when colleagues from other fields ask questions such as, “You teach religion, eh? So, are you religious?” or how sad I become when students interested in studying religion confess that they’re unsure of such a major because they’re not religious or they don’t “get” the utility of studying religion (what do y’all exactly do in this field?) or when they think that scholars of religion (always) double as ministers in their time off (some might, and that’s fine, but I, among many others, don’t).

This dilemma might involve (and say something about) the failure and nerve in the academic study of religion. For instance, consider the critiques and criticisms that McCutcheon’s scholarly work has undergone throughout the years in the field of religious studies (“killing religion” or “throwing the baby out with the bath water” and so on) – yet, one visit to the department of religion that he currently chairs flips the script of such exaggerations. The academic study of religion at The University of Alabama (currently an undergraduate program) is very much alive & well and thriving. Coincidental, eh?

On Marketing The Study of Religion

Here are some artifacts I collected from the Department which caught my eye during my visit. This department spends a great deal of time getting the word out (in a wide variety of ways) about majoring/minoring in religion.

“This is Not A Button”

That is, the study of religion isn’t about studying religion, per se – but rather, studying that which comes to be understood as religion.

“Why do we care who wins the big race?” 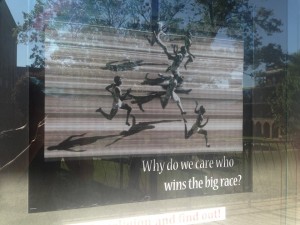 Because we study not so much who wins the race, but the strategies of the social actors involved and the contest that makes up the race itself and who and what gets counted among the winners and losers. 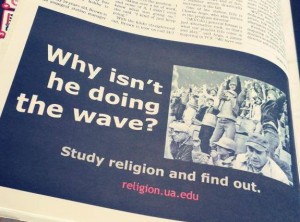 “Why isn’t he doing the wave?”

Maybe he is and the others aren’t? If we focus not so much on what a wave is but rather what social interests constitute a wave itself among a particular group of people in a particular time then we might be persuaded that:

“The same destabilizing and irreverent questions one might ask of any speech act ought be posed of religious discourse. The first of these is “Who speaks here?”, i.e., what person, group, or institution is responsible for a text, whatever its putative or apparent author…”