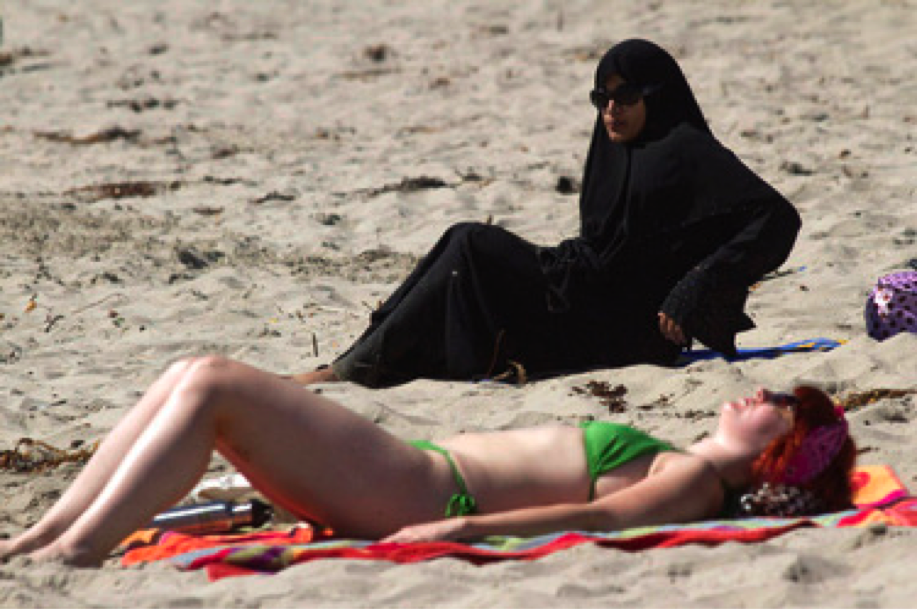 Recently, as I sat down on a beach near Nice, France, I took notice of two women in front of me. One was wearing the tiniest of French bikinis, the other, a full burka. Other than the sand — Nice’s beaches are quite pebbly — the scene looked a lot like the photo above and sent my mind spinning, a growing clarity or distillation of oh so many discussions and debates I’ve had here in the academy about women’s rights, liberation and the like began to emerge. The juxtaposing bodies, each “oppressed” or “subjugated” in their own ways via the burka or bikini (of course, depending on the social interests at stake), collided in front of me in the south of France, a country that has recently banned face-covering burkas from public altogether and the more basic headscarf from schools and other civic institutions and establishments back in 2004.

It seems, though, that some other nations are thinking about similar legislation. In the UAE, growing anger over visiting women showing too much skin, has some in Dubai looking to impose laws that would dictate what (or how much) must be worn in public places, including beaches.

The battle over women’s flesh gets even more interesting — when we think of these issues as related to some notion of “liberation” when we find out that women are seeking solace in segregated, women’s only beaches popping up in places like Egypt where Muslim women can go and wear a Western bikini without fear of men seeing them — except for the men on jetskis driving up to check them out for a second or two.

It seems that the beach is a place where such parity is foregrounded. The “Beach Is Better,” Jay Z told us last summer, and maybe that’s because everyone brings themselves to the beach:

I brought sand to the beach

Cause my beach is better

You can keep your beach

Cause that beach whatever…

So, what do you think? Is the beach really better?

One Reply to “Your Turn: Is the Beach Really Better?”