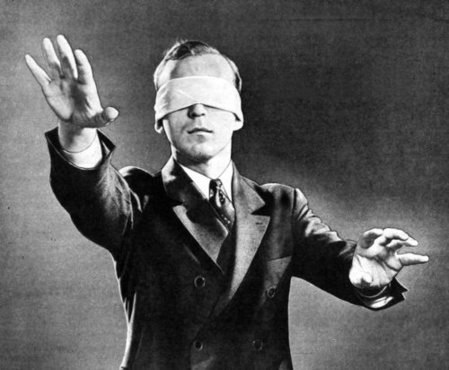 But is it as simple as that?

For instance, as phrased in the concluding lines to the india.com article on the case of the anti-black magic critic who was murdered recently:

[Dr. Narendra] Dabholkar was a voice that spoke up against blind faith and fear. A voice of science, a voice of truth. But his rational spirit and movements will live on and continue to enlighten many ignorant souls.

Similarly, as stated by my other earlier example, the former magician, James “The Amazing” Randi (somewhat reluctantly borrowing the terminology of “brights” to name those who opt for a naturalistic approach):

brights base all of their decisions and their beliefs on logic, rationality, and evidence. That’s the thing in which they differ from the average person who takes anything that comes along that looks attractive. “Oh, I like that; I think I’ll believe in it.”

All of their decisions…? Really, Randi? For this suggests that marketing campaigns have little effect on these enlightened, above-average brights, who must be the most rational of rational choosers. But I’m guessing that they succumb to the lure of, say, advertisers or national anthems or Father’s or Mother’s Day cards no less than anyone else. That is, I’m proposing that they were not using logic, rationality, and evidence when many of them decided (but was it ever really a conscious choice they each made?) to dress in button down collars and tweed jackets — the mandated uniforms of intellectuals. It’s a wonder they don’t all white wear lab coats, come to think of it.

My point? Does the average or ignorant person — whatever that actually means — really take just anything that comes along? Or, conversely, are brights really so calm, cool, and calculating? And if not, then why portray the issue as so cut and dried?

To anyone following developments over the past decade or so within the so-called new atheism debates in the U.K and the U.S., this issue should be pretty familiar — it is portrayed as a battle between diametrically opposed religion and science; but there are those who are rather frustrated by the way the whole issue has been framed. Such people will point out how what “we” call confidence might not be all that far off what “we” demean as other people’s faith. Not that some of us are religious and don’t know it but, instead, that all decision-making probably draws on a host of strategies, each specific to certain situations and certain desired ends. For take the very term “blind faith”; the insertion of the adjective seems to recognize that “we” too have — what shall we term them? — non-rational affinities (like our so-called faith in the justice system, our faith in the free market, or maybe even our faith in causality or statistics or that the car ahead of us on the highway will remain moving at a constant speed?) but that some of those affinities are somehow judged by us as more or less acceptable than others. So upping the ante with the qualifier “blind” for just some of these affinities sounds to me suspiciously like special pleading, akin to calling other people’s agendas “special interests” whereas our own are, what, just business as usual?

For just because something is judged to be more or less probable (such as knowledge based on empirical observation, what we call induction) does not make the prediction about the result of the next flip of the coin any more correct — we all know this, right? Yes, we have strong confidence based on our faith in the stats that we presume someone else has run, or just based on our own past experience, enough so that we boldly walk through the open space on our way to the patio, but who knows the factors that might intervene with the next coin toss — e.g., does a recently cleaned, and thus unseen, glass door stand in our way? But I’ve met one or two scientific-types who have no ironic appreciation for this inevitable gap between past observation and claims about the future and who, instead, smooth right over it with amazing confidence, seemingly presuming that they have certain knowledge, the very thing that a closer look at inductive reasoning tells us we can never have, no matter how many dogs with spots we’ve seen.

But what shall we call the thing that allows them to seamlessly knit together that gap between past and unpredictable future? By what name will their god of the gaps go by?

I think that we should coin the term “blind confidence” to name those who seem to be on one side of this debate but who, in fact, appear little different from the people whom they critique so harshly on the other; and because they may surprisingly share so much, both parties, I think, are involved in mere name-calling (akin to the widely accepted etymology for the term “hocus pocus“) to de-authorize all other comers (including evidence to the contrary of their hopes and dreams).

So whether my interests here or there prompt me to side with one of these two sides over the other, to draw on this or that decision-making strategy in this or that situation, hopefully does not prevent me from seeing just how slippery (maybe even arbitrary) this all is in actual practice. For I have no doubt that both sides in this seemingly polarized debate often act based on rigorously scrutinized past experience while sometimes also getting all watery-eyed over nostalgic long distance phone commercials.