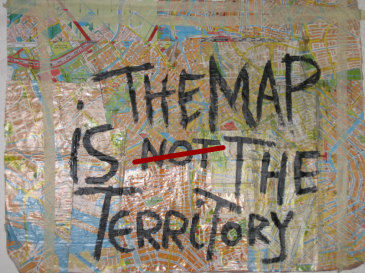 Not long ago I heard a story on “Morning Edition,” the National Public Radio news show, on the order and identity that GPS and maps are now bringing to the Kenyan slum of Mathare (in Nairobi), and on the lives of a group of people there who have formed The Spatial Collective. Give it a listen here — but when you do, keep in mind Alfred Korzybski‘s (d. 1950) much-quoted statement that the map is not territory.

Many people in the study of religion know this phrase from a 1974 inaugural lecture at the University of Chicago delivered by Jonathan Z. Smith (and published in a collection of his essays by that same name); it is often quoted as a evidence of ones theoretical sophistication (i.e., “Our descriptions are not to be confused with the religious experiences that we’re describing,” one might warn), yet a troublesome origins/authenticity claim remains; for in cautioning us not to confuse representations with the things being represented (I think of Margritte‘s famous painting of a pipe), we perpetuate the notion that there is a position-less stance from which the authentic things in themselves can somehow be seen for what they are, thereby allowing us to assess the map’s shortcomings (comparing “a mere painting of a pipe” to “a real pipe” or somehow knowing that all those blind men are in fact feeling the same elephant). The fact that we know there’s a gap between things and their representations is therefore the problem.

The far more nuanced way of approaching how we understand representation, of course, would be to follow the anthropologist, Gregory Bateson, who commented as follows on maps and territory:

We say the map is different from the territory. But what is the territory? Operationally, somebody went out with a retina or a measuring stick and made representations which were then put on paper. What is on the paper map is a representation of what was in the retinal representation of the man who made the map; and as you push the question back, what you find is an infinite regress, an infinite series of maps. The territory never gets in at all.… Always, the process of representation will filter it out so that the mental world is only maps of maps, ad infinitum. (Steps to an Ecology of Mind [1972]: 454)

Smith himself said as much in his 1974 lecture. Playing with the notion of incongruity between maps themselves (be they social structures, mythologies, or scholarly theories), and the manner in which novelty is introduced into these gaps by way of interpretation, negotiation, judgment, compromise, etc., he concluded that essay as follows:

Which brings us back to The Spatial Collective in Nairobi. The news story ends as follows, quoting Isaac Mutisya (known as Kaka), one of its members and an inhabitant of Mathare:

The report — itself an act of identification, for who among its U.S. listeners already knew of Kaka and his story? — makes evident that identities are collaborative and thus social (you can’t have an identity alone) and what’s more, that maps make identities and don’t just plot them or express them. For map making — not just marking a point or talking into a microphone but doing so for others to see and hear, even if those others exist only in your imagination — is the act of identification that makes the perceived identity possible, for Kaka and for us;  without it, all traces of existence are erased, leaving no marks and thus no identity possible.

2 Replies to “The Map is the Identity”