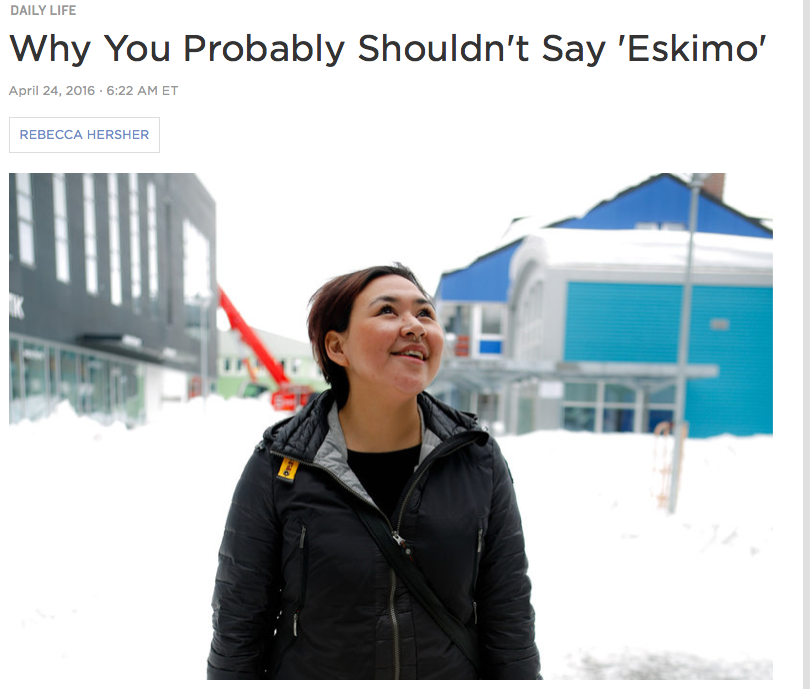 Click the above image to read the brief article, but here’s a snippet:

So, contrary to earlier etymologies that anchored the word in what some (or maybe even many) now see to be derogatory associations (i.e., uncivilized raw meat eaters…), it’s now thought to derive from a much milder and merely descriptive association concerning their footwear.

(Aside: given the price of sushi these days, eating things raw is hardly a static designator.)

But is this alternative etymology mild enough to rehabilitate the term? Likely not, since “the people of Canada and Greenland prefer other names.”

This episode in origins, identity, and naming brings to mind once again the problem with debating the right or acceptable word to use for something: such debates overlook the very designation of certain things as things worth talking about. Instead of assuming that some stable item in the world proclaims its own existence and thereby deserves a name, and then trying to decide the best name for it (and which sensibility do we invoke to make that decision?), we might instead study why it is that we talk about the world in certain ways and how the names we give to things make certain ways of seeing, acting, and organizing seem more persuasive, even natural.

So why not study how names make things?

For why do we even need a distinct name to identify people who happen to live in the north? Or, better put, north of us. (For, without presupposing positionality there’s really no north in the abstract, right? Things are, instead, north of this or that place — and who gets to determine the starting place?! Now that’s the question.) So what set of assumptions about the world, what set of interests, which or whose situation or location, prompts us to see some people as distinct, set apart, unified to each other and thus different from us, and thus deserving of a name — tackling these questions are well prior to debating which proper name to give to them. Or, to rephrase one more time, what are the mechanisms of “themification” (to coin a terribly unwieldy term)? To refer to the above quotation, when did “the people” in question, those who apparently have preferences for what they are named, become a coherent people (in their minds as well as those of others), with shared interests — part of a coherent group thought to stretch across more than one modern nation? How old is that seemingly shared identification and, if it turns out to be more recent than we might at first think, then what factors teased it into existence and keep it going?

I’ve written before about debates on the correct term to use to identify people in the US whose ancestors were from Africa — regardless the term used what ends up being naturalized is the presumption that human communities ought to be designated based on such ad hoc traits as skin color. (That is, the presumption that certain biological differences ought to attract attention goes unexamined.) So what gets overlooked in debates over proper names is how, in this one example, the discourse on race is normalized — regardless how acceptable the term of designation now seems to be.

So whether Eskimo or Inuit, what (and who) gets normalized in assuming a homogenous group lives way up there in the cold?

Answer: me and my warm world down here in the south.

But making this move — the move to study how our worlds are signified and thereby made sensible in the first place — is rather more work than just debating how we should talk about what strikes us a pre-packaged, and thus eternal and self-evidently meaningful, place.

2 Replies to “Names and Things”