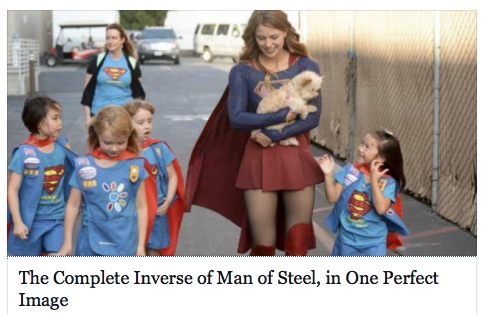 Have you seen that pic, or that article, making the rounds of social media? There seems to be a script problem on the source’s page but click the graphic if you want to try to find the article, concerning how the upcoming Supergirl series flies in the face of the stereotypes of male superheros — notably the recent “Man of Steel” depiction of Superman (all dark and brooding).
That pic brought to mind a recent post on Facebook where a friend quoted Foucault’s The Order of Things, soliciting comments:

The above image/caption provides a nice demonstration of Foucault’s point, I think, for despite seeming to be the opposite of the macho, loner superhero, the very judgment that the image is the opposite — is the “complete inverse” — is possible not only if we also have up an running a specific reference point but, more than that, only if we presuppose that this designator masculine is best typified in this or that trait while that other designator, feminine, is represented by these or those diametrically opposed characteristics.

To put it another way, only if you think women are best or essentially summed up as nurturing caregivers (as opposed to, what?, the indifferent Marlboro man, that all males supposedly are?) would that image with the little girls and the dog strike you as symbolically potent.

To bring it back to Foucault: an unspoken gender ideology, comprised of a mutually entwined binary, not only lurks in the background of this distinction but, inasmuch as we’re focused on just this difference — inasmuch as the above image stands out for us in just this way from the one below — is efficiently conserved and reproduced (i.e., silently invested) by means of such judgments.

It is the episteme that defines the condition of knowledge at this specific site — regardless how bright or washed out the superhero’s colors are.