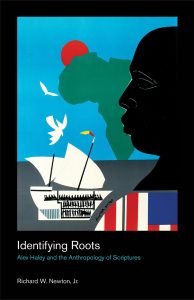 This volume presents a cultural history of Alex Haley’s Roots as a case study in ‘operational acts of identification.’ It examines the strategy and tactics Haley employed in developing a family origin story into an acclaimed national history. Where cultural studies scholars have critiqued notions of sacrosanct ‘rootedness,’ this book shows the fruit of critically identifying those claims. It reframes the concept of ‘roots’ as a theoretical vocabulary and grammar for the anthropology of scriptures — a way of parsing the cultural texts that seem to read us back.

Identifying Roots invites scholars of religion to reimagine their place in the humans sciences. Theorizing from a tradition of African American interventions in the history of religion, Richard Newton registers the social dramas and dynamic rhetoric that render the cultural logic of scriptures powerful. Creatively marshaling intellectual history, ethnographic autobiography, close reading, and discourse analysis, Newton enumerates the consequences for signifying people and cultural texts as intrinsically significant. More than an investigation into Alex Haley’s legacy, Identifying Roots unearths the politics of beginnings and belongings.

Introduction: The Anthropology of Scriptures

1. Identifying with Alex Haley “Before This Anger”

2. “The Book that Changed America”

3. “The Saga of an American Family”

5. Root-Work in the Academic Study of Religion