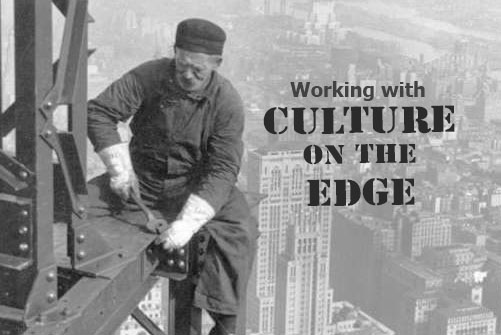 A new book series from Culture on the Edge — a series edited by our own Vaia Touna — invites respondents to work with the group on key theoretical issues of relevance to the study of identification. Each volume — edited by a different member of the group — tackles a specific topic, e.g., Origins, Code Switching, Strategic Essentialism, Authenticity, etc., and asks a set of new readers to work with revised posts that often originally appeared at edge.ua.edu — pressing them forward, critiquing them, or providing further illustrations of social processes at work.

Aimed at students and classes that are looking for ways to complicate their work on identity claims, each of the little volumes in Working with Culture on the Edge contains ten or more succinctly paired main chapters — that retain the informal tone of the blog — in which respondents take the group’s work in novel directions, along with an introduction to the volume, an extended theoretical conclusion, as well as a list of suggested readings and a transcript of the group discussing the topic and the commentaries that their work elicited.

Taking scholarly blogging in new collaborative directions, Working with Culture on the Edge offers readers an invitation to join the contributors in applying the critique, thereby making identity, at a wide variety of sites, all the more interesting.

The members of Culture on the Edge are joined by a variety of early career scholars in the inaugural volume in this new series, all examining the problem of origins discourses.

The second volume in this series (2017) is devoted to the analysis of the differences that we construct to organize our worlds. The two central essays by Mayanthi Fernando and Aaron Hughes address the discourses on Islam in France and the United States, with responses by ten early career scholars and an Introduction and substantive Afterword by Steven Ramey.

The members of Culture on the Edge are again joined by a new group of early career authors, this time they’re all rethinking our commonsense model of identity — seeing it not as a quality that we naturally possess but as the result of the contingent  situations and changing relationship into which we are placed.

In this series’ forthcoming fourth volume, the growing members of Culture on the Edge and another new group of early career authors come together to examine claims of authenticity — seeing authenticity as a socially contested and constructed label that is used to manage and codify a variety of choices in relation to understandings of identity formation.