The End of the (Face)Book and the Beginning of Writing

In Of Grammatology, Jacques Derrida deconstructs the metaphysics of presence: differance — nothing in itself — is the constitutive negativity that makes presence possible yet impossible. No thing can ever be present to itself or to another without the insertion of differance, the gap that makes hearing or vision — or any form of knowing — possible in the first place, and that gap makes full presence a priori impossible.

Zuckerberg’s comments on identity strike me as a defense of the metaphysics of presence: the self with integrity — the integral self — must make itself fully present to itself and to others. To hide part of the self is, apparently, to lack integrity. In this Zuckerberg is correct, except that that very lack of integrity is what makes selves possible in the first place; unless we except our selves from our selves, we cannot be present to another at all. Every manifestation of a self on Facebook is always already constituted by differance; every click is a dislocation of unity. The loss of integrity is what makes the self visible. There is nothing outside the text —this process of textuality, iterability, and writing is what weaves selves into existence in the first place (although, for Derrida, this means that there is no “in the first place”). END_OF_DOCUMENT_TOKEN_TO_BE_REPLACED

Zimmer’s critique of Zuckerberg’s disingenuous claim that somehow having more than one identity equates to a lack of integrity is spot on. In fact, Zuckerberg’s claim is laughable, for we analysts know all too well that identities are never singular nor static – rather – always fluid over time and space and most importantly perhaps, they are co-constitutive and contingent, never of their own complete making. This thinking, about identity and identities is well marked by the work we do here at The Edge insofar as we take seriously Bayart’s assertion that “there is no such thing as identity, only operational acts of identification.” With that in mind, and pushing further the constructed nature of and the tactics and strategies that make identities possible, the social actor does not have complete control over how their identities are made – and more so – how such identities are read and represented, especially as they are mediated technologically in and through online formats like social media. END_OF_DOCUMENT_TOKEN_TO_BE_REPLACED

When I signed up for a Facebook account (I held out for a while, not really understanding the potential for something called a “social network” that combined two things to which I’m not particularly suited: technology and, well, social networking), I remember someone telling me in an attempt to explain the difference between how one presents oneself on Facebook vs. Myspace, “Facebook is like a posed photo. Myspace is more like a candid snapshot.” My friend was trying to help me get a sense of the format and layout of the two sites, how they would present the information and images I post to the cyberworld around me. His ultimate point in response to my privacy paranoias? Sure I had control, but I didn’t have control. I’ve been thinking about that conversation ever since the controversy over Facebook’s “real-name policy” flared up. END_OF_DOCUMENT_TOKEN_TO_BE_REPLACED

Michael Zimmer’s critique of Zuckerberg’s assertion that people should only have one identity reflects my initial reaction to that statement, as Zuckerberg ignores the strategic ways that everyone presents themselves. Embedded within Zimmer’s critique, however, is a similar notion of the stable self. He writes, “It is not that you pretend to be someone that you are not; rather, you turn the volume up on some aspects of your identity, and tone down others, all based on the particular context you find yourself.” The identity is stable, and we strategically choose what aspects to emphasize here or there. But, processes of identification are more complicated than that. END_OF_DOCUMENT_TOKEN_TO_BE_REPLACED

It’s no accident, of course, that “integrity” has a direct relationship with the Latin adjective “integer,” as in the word we today use to name whole numbers, in distinction from their parts, i.e., fractions. And so it carries with it the connotation of being complete, perfect, even unblemished. But there was a time when this modern sense of the word might have described not Mark Zukerberg’s apparently ideal person—one who is, I guess, consistently, transparently, and rigorously themselves in all occasions—but, instead, one who was able to moderate that apparent self, all depending on the requirements of the setting, something determined by the other social actors involved (e.g., it’s not “a black tie event” until someone shows up in a black tie). I’ve written on this classical sense of pietas before, I know, but it seems relevant once again to point out that wholeness might instead be the social fiction created by the artful management of the innumerable fractions, some of which may have no common denominator; for the quality of consistency or uniformity is surely the last thing one wants—whether in ancient Rome or in Facebook’s headquarters—when moving from interacting with social superiors at work to the barista at the corner coffee shop to friends at the bar or family at home. These once taken for granted distinctions are obviously challenged not just by the eternal present of the virtual world, where we post and tweet and, now, yak anonymously, but, more importantly perhaps, by Facebook’s own quest to monopolize ownership of that world and thus ownership of the means whereby we produce those selves. END_OF_DOCUMENT_TOKEN_TO_BE_REPLACED

Zuckerberg’s idea on the one identity and the integrity of maintaining one identity made me think of the times when, talking with friends, one hears: “That’s so you!” or “Come on, you are not that person.” Whether one is or not “that person” friends think, I think that who we are doesn’t derive from the inside of us and neither it is “expressed” monolithically onto our behaviours; instead, as Theodore Schatzki wrote in his 2010 book, The Site of the Social: “Identity is a complicated affair”—an affair that involves both me and the way I perceive who I am and act in different situations, but also by the way my friends perceive with whom they think they are interacting and thus the way they expect “me” to act in different situations. Because sometimes they tell me that I’m not being me. No doubt different friends have different ideas of who we are, even on Facebook, for I have no doubt that my posts, whether messages, pictures, etc., are interpreted like texts by different friends in various ways, creating an idea of me that is in some occasions different from what I think of as myself, and over which I have no real control or at least I have up to a certain extent (for I could have not posted this picture or that update).

The question, then, is: Does this largely uncontrolled interpretive variety minimize my integrity as a person?  And even if it does, then it seems to confirm that my self and its integrity are social and not personal, no? 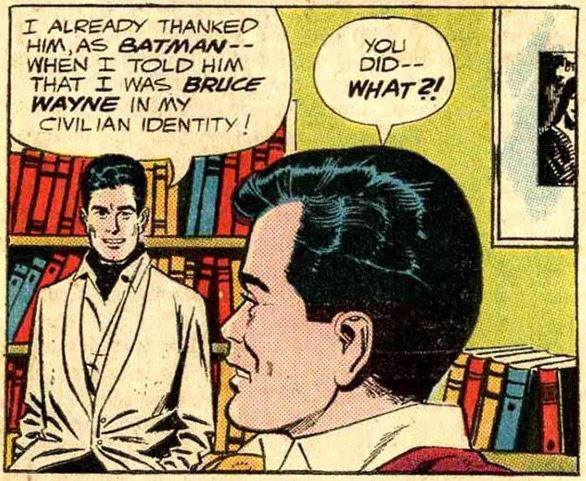 With our own interests in code-switching, identifications rather than identities, and competing claims of legitimacy or authority, we think the emphasis on a single identity is ripe for analysis, so we have each offered a brief response… one being posted each day for a week. END_OF_DOCUMENT_TOKEN_TO_BE_REPLACED