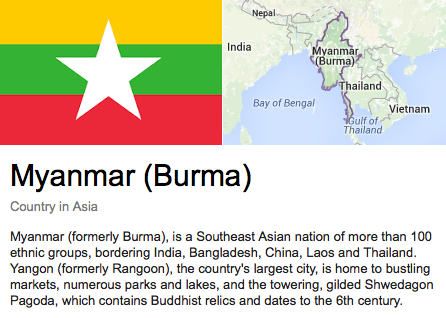 Elections in Myanmar have been in our news recently — in fact, their first open national election in a quarter century. Depending how they turn out (something that will be evident by the time this post hits tomorrow, presumably), Myanmar might be in our news even more, especially since their constitution currently outlaws the frontrunner from even serving as president. END_OF_DOCUMENT_TOKEN_TO_BE_REPLACED

Monks in Myanmar encouraging violence, while that image challenges common assumptions about those who identify as Buddhists, accounts of such events often actually reinforce those assumptions. On April 30 people identified as Buddhists burned mosques and homes of a minority group identified as Muslim, reportedly resulting in injuries and one death. A recent BBC account of this ongoing conflict in Myanmar reiterates the trope that Buddhists follow a non-violent tradition. The author, a fellow at Brasenose College of Oxford who has studied conflict in Sri Lanka, drew parallels with Sri Lanka to argue that political interests corrupted the ideal teachings of nonviolence and justified violent action to protect position and power. END_OF_DOCUMENT_TOKEN_TO_BE_REPLACED