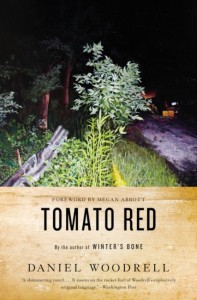 Asking about my favorite non-theory book is kind of like asking about my favorite child. As such, I’ll dodge that question and say that it’s a tie between all of the Harry Potter books and all of the Daniel Woodrell books. The first Woodrell book I read was Tomato Red. Next was The Death of Sweet Mister, followed by Winter’s Bone (remember that Jennifer Lawrence movie? Woodrell wrote the book), and all of the others shortly followed (most recently for me, The Maid’s Version). The Harry Potter books don’t need any sort of explanation, I suspect. But Daniel Woodrell might, and he’s well worth the introduction.
I suppose one of the reasons why I’ve got such strong feelings for Woodrell is not only because he’s an absolutely amazing writer, but because he writes largely about the region where I’m from. I grew up in the Ozarks, and although I was not a child on the verge of starvation living at the whim of my mostly-absent meth-dealing parents, when you live in the places about which Woodrell writes, these realities are never far away if you know where to look. END_OF_DOCUMENT_TOKEN_TO_BE_REPLACED