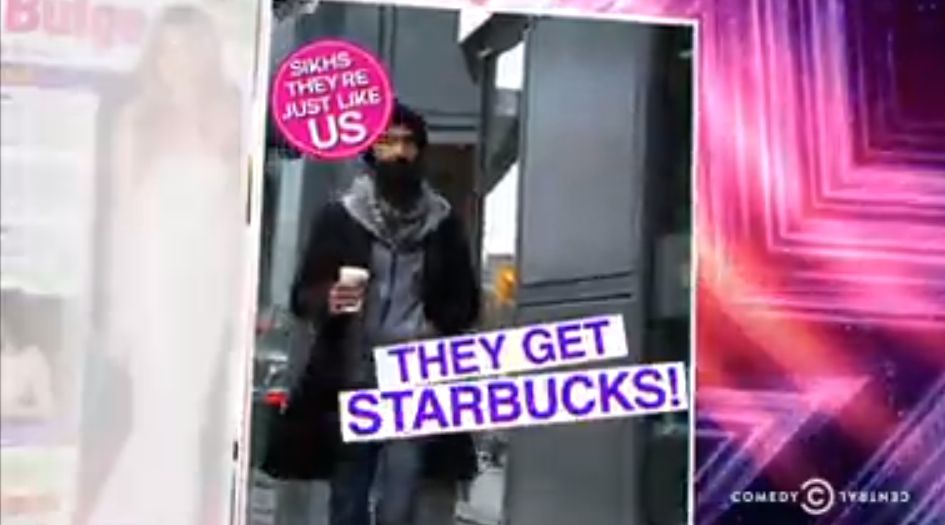 The Daily Show’s recent sketch about Waris Ahluwalia and the problematic assumptions that those who wear turbans and identify as Sikhs continually face illustrates quite well the challenge of describing various communities. The segment highlights the efforts of some self-identified Sikhs to engage the broader public with information about their community and practices.

Perhaps the most powerful element in the segment is the refusal of the participants to emphasize that Muslims constitute the real threat, not them. This refusal draws on the issue of over-generalization that many raise when people identified as Muslims are treated as a danger. Ahluwalia directly asserts that such a move to throw Muslims “under the bus” is not how he was raised, an effective way to highlight the generosity of the teachings that he associates with Sikhism. The turban reminds him to “treat humanity with care and kindness,” thus resignifying the turban as a positive physical symbol.

That positive image of the turban and Sikh ideals presents a normative statement about what Sikhism teaches. Like any normative statement, this assertion can differentiate proper Sikhs from those who are not proper. Such normative assertions makes sense from people who identify with a community and therefore participate in the construction and definition of that community. Groups continually negotiate who fits and who does not; that is simply a factor of maintaining a defined group, as Fredrik Barth argued almost fifty years ago.

Such a constructive assertion, though, is different from efforts of people who do not identify with a particular group to describe that group. If we take seriously the segment’s assertions to avoid over-generalizations and to refrain from throwing groups “under the bus,” descriptions of another group should avoid legitimizing particular normative statements from members of that group, as those normative statements are invariably contested. Normative statements presented as descriptions are common in the descriptions that scholars of religions make. For example, the notion that wearing the turban is a part of Sikh practice, which several people in the segment make, is a reasonable normative statement, but it, along with other elements like the highly visible uncut hair and beard, is also fiercely contested. Some who self-identify as Sikhs see all of these elements as requirements for a devout Sikh, while others see them as optional, based on different interpretations of events attributed to the tenth Sikh guru in 1699.

Repeating such normative statements as if they are straightforward descriptions of a community effectively throws under the bus those who interpret the boundaries of their group differently. Such assertions marginalize some in ways that are similar to the discrimination that those who wear turbans often face in the United States. For example, assertions that Sikhism is an independent religion and that the Adi Granth (the text that many self-identified Sikhs consider their living guru) is exclusively a Sikh text are common, even dominant descriptions of Sikhism, but these assertions are actually contested. Some who identify as Sindhi Hindus revere the Adi Granth as a Hindu text. These contested understandings of the Adi Granth have created conflicts at times over control of copies of the Adi Granth and centers that house a copy of it (although often people who identify with each group have developed cooperative and mutually beneficial relationships).

When it comes to throwing a community under the bus, too often scholars and others have, intentionally or not, repeated community efforts to construct their own boundaries as if they are simple, uncontested descriptions, thus throwing others under the bus. Taking seriously the ideals presented in this segment requires greater effort (the right thing is not easy, as the segment asserts) to acknowledge the contestation in various efforts to define clearly who is a good Sikh, Christian, Hindu, etc. Otherwise, the descriptions become part of the problem.