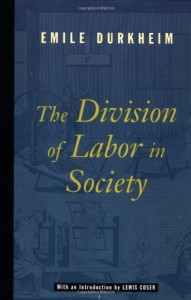 While I’m tempted to name one of my favorites by Althusser, Derrida, Foucault, Bourdieu, or Butler, I think I’ll go with Durkheim’s The Division of Labor in Society. While Elementary Forms seems to be everyone’s favorite in religious studies, I have a strong preference for Division of Labor. In Division of Labor we see the best and worst of Durkheim all at once: sometimes rigorous and sometimes sloppy in his argumentation, he delivers a devastating blow to methodological individualism, he shows how culture is fundamentally related to society or social structure, but — although he frequently departs from the self-serving views of his contemporaries — he speaks freely of “primitive savages” across the globe and ratifies a certain brand of European ethnocentrism. I love teaching Division of Labor because I get to show students a brilliant mind whose views deserve continual consideration yet not always acceptance. Every lecture turns out to be a love letter of sorts to Durkheim, but with a love that resists romaniticizing him and instead loves him despite his flaws.

Plus, I hate methodological individualism, so there’s that.

Where I find Durkheim most useful for my own work — particularly in Capitalizing Religion –– is his commentary on how ideologies have an attenuated reach across societies as the division of labor increases and as the volume and density of cities grows ever larger. On the one hand, particular ideologies — perhaps relevant in one or two spheres — cease to have a functional salience in other sectors or fields. On the other hand, as cities become more dense we become increasingly separated or isolated from other communities or fields, and there’s simply no way to enforce the application or authority of an ideology across all spheres. While I reject the usefulness of the “secularization” thesis, as it assumes a fundamental distinction between “religious” and “secular” institutions, I do think the attenuated reach of, e.g., Christian institutions and ideologies makes sense in a capitalist mode of production.