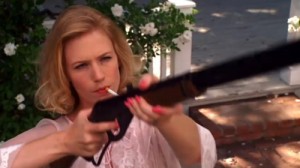 In the ever-growing torrent of op-eds about Donald Trump, the subject of the candidate’s misogyny has increasingly become a topic of interest and focus. Most recently, I came across this New York Times piece by conservative columnist David Brooks. In it, Brooks bemoans Trump’s bombastic misogyny that seems predicated upon competitive alpha male one-upmanship.

Not much to argue with there.

Trump has been able to wield insults at women with cavalier disregard for the political fallout because, well, there doesn’t seem to be much political fallout. He continues to do well in the polls, and the media can’t seem to get enough of him. But Trump has never been Trump in a vacuum. And that’s what I find so interesting — because, even when critiquing him, pundits and columnists, make a monolith of his garish rhetorical style, package it, and sell it to consumers. It’s easier to point out Trump, call him a misogynist (I don’t disagree with that assessment, by the way) and then (but here’s what troubles me) rest easy with the idea that sexism has been located and, thus, vanquished. This is what Brooks’s piece does by ignoring the power moves in his own rhetoric…but I’ll get back to that in a minute. If Trump is the paradigm of gender-based bigotry that is allowed to flourish in a political landscape that cringes at what so many see as “political correctness” run amok, it becomes unnecessary for these writers and talking heads to think about misogyny structurally. Also unnecessary are those annoying mental gymnastics that are needed to make sense of the unease when misogyny comes from unlikely sources or in compliments’ clothing.

Just last September, for example, the Dalai Lama sparked uncomfortable criticism when he said, in veritably Trump-esque fashion, that his successor could be a woman, but she’d have to be really attractive in order to have any influence. Back in 2013 when he suggested that women make the best leaders because of their natural capacity for compassion, despite there being a bit of muffled critique and a few raised eyebrows, progressives all over cyberspace responded by virtual high-fiving him and applauding his seemingly complimentary insight. Both comments are obnoxious, if not downright offensive. In suggesting the problem is with the Dalai Lama’s comments themselves, however, many overlooked the fact that the data across numerous studies and reports show that women do dramatically benefit professionally — both in influence and pay — if they are deemed by others as attractive. But just that kind of structural misogyny is exactly what people don’t want to think about.

The easier solution is to point out the flaws in the Dalai Lama’s claims and call it a day.

Where Brooks’s piece on Trump is concerned, the problem with Trump is that his campaign suggests “a rejection of the civility codes of the educated class.” Brooks stacks Trump’s “unvarnished misogyny” against the, er…, varnished sort that seems to bother him less (like the mid-century sexism about which he says, “At least in those days negative behavior toward women and family members was restrained by the chivalry code”). His characterization is based on the notion of a nebulous “ideal man,” against whose gentlemanliness Trump and his rubes (whom Brooks compares to a Civil War-era group of contrarians from “less genteel backgrounds” than their cultured counterparts) have rebelled:

Today, both men and women are called upon to live up to the traditional ideals of both genders. So the ideal man, at least in polite society, gracefully achieves a series of balances. He is steady and strong, but also verbal and vulnerable. He is emotionally open and willing to cry, but also restrained and resilient. He is physical, and also intellectual.

Thus, the seeming progressiveness that critiques Trump’s unabashed misogyny relies upon its own unabashed maintenance of something called “polite society” (presumably populated by the “educated class” he mentions) and “traditional ideals.” In turn, these constructs rely upon stable rubrics of us/them dichotomies — dichotomies that have historically not been kind (to put it mildly) to women, not to mention people of color and the economically exploited.

Now, if misogyny is Trump’s problem and not a broader social reality of which the candidate is merely a byproduct, one can appear to fight misogyny by brandishing one’s noble sword of chivalry and wielding it against that singular sexist affront. In the process, you don’t have to think about pesky issues like the pay gap between men and women, a gap that widens even more for women of color.

Brooks refers to a Slate piece by Franklin Foer, bluntly entitled “Donald Trump Hates Women,” in which Foer catalogues the billionaire-turned-politician’s consistency when it comes to his long history of dismissing and/or defaming women. The examples are difficult to stomach at times. Pointed and compelling though it may be, however, Foer’s critique nonetheless begins with its own troubling depiction of social groups, once again employing the specter of polite society: “On its face, Donald Trump’s hateful musings about women and his boastful claims of sexual dominance should be reason alone to drive him from polite society…”

I’m not exactly sure how or why invoking a part of society distinguished by its politeness is that far removed from those invested in a move to take “their” country back. Both rhetorical devices rely on clear insiders and outsiders, groups competing for dominance in an American political landscape and, as such, identified through strategies and practices long steeped in racism, classism, and—yep, sexism.

Frustrating for David Brooks seems not to be the misogyny itself but the style in which Trump brandishes it. Trump is too overt about it, too unapologetic. It isn’t a disservice to women so much as it is to men today who strive toward the “new masculine ideal,” which he calls “an unalloyed improvement on all the earlier masculine ideals” and “a great achievement of our culture.” Struggling not to hate women or to take them seriously is tough, after all. Living up to the new ideal “is demanding and involves reconciling a difficult series of tensions.”

n and gentle during kids’ bath time.” Trump makes it all about sex and power. The millennial magic man fantasy is all about sex and power, too — just a kinder, gentler mode of dominance, subjecting women’s senses of self-worth not to his chastisements but to the validation of the men in their lives. Cue the “I heart my wife” bumper stickers.

Living in polite society can take a toll on women, too, though. Just ask Betty Draper.

Even when the Trump is lampooned, it tends to happen at women’s expense. Take SNL’s latest. Kate Bolduan’s character (played by Kate McKinnon) introduces herself by way of explaining her place at CNN, since she has “the brain for MSNBC but the hair for Fox News.” Enter conservative commentator Scottie Nell Hughes (Cecily Strong), who calls herself “crazy” and “a full-blown nut job.” Since they’re the ones issuing the insults, though, I guess it’s supposed to be okay, right…?

That Scottie Nell Hughes cites her being named in 2013 by Right Wing News in their annual “Top 20 Hottest Conservative Women in the New Media” as an honorific early in her bio on her own webpage is exactly the reason something called misogyny is not simply the lamentable problem of a misguided playboy. Its implications for power and standing among various social groups are far-reaching (not unlike Trump’s self-identified giant man hands). Trump’s sexism and that which frame the notion of “polite society” are both rhetorical moves jockeying for power — they just happen to be at odds with one another at the moment. And “I heart my misogyny” bumper stickers haven’t yet hit the market to help them out.

The conversation about misogyny as played out in Brooks’s new day of men and women being “called upon to live up to the traditional ideals of both genders” isn’t about equality. It’s about the genre, leaving Trump’s hate or the ideal man’s sensitivity to duke it out. Hey, two dudes fighting over who’s better to women?? This is a new day! Pistols at dawn!