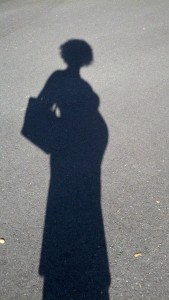 Being a mother was never part of my general life plan.  In fact, where babies are concerned, I’m the unsophisticated rube who tends to think all infants look, sound, and smell the same.  So, when my partner and I learned we were going to be parents in just forty short weeks (that’s another thing—even now, the week count might as well be military time, as far as I’m concerned), we traded blank stares regarding what that means or how to go about thinking toward how our lives would change once the squirmy, cartilage-laden fellow joined us.

We did what any startled academics might do when confronting something unexpected: we gathered information, and fast.  Pregnancy became a project through which I could exorcise some data-driven control issues.  If I knew enough, I’d do enough.

A funny thing happened as I poured over the must-read books from all sorts of different schools of thought promoting a particular method as the way to be pregnant, to deliver a baby, and to subsequently rear said baby…  While there are vast disagreements over how one might go about being a mother, one claim was paramount pretty much across the board: motherhood is, apparently, a mantle one adopts by tapping into an intrinsic Ur-mom identity held deep within oneself.  One book I found useful while thinking toward my own labor and delivery, for example, is Birthing from Within.  It’s got a lot of cool information in it.  It’s also a text whose author describes the end of her labor process as follows: “for an unforgettable moment…I felt a oneness with all mothers who had ever given birth, and to mothers all over the world who were laboring and giving birth with me that night…I had become a link in the eternal chain of Mothers.”

Maybe this supposed universality is why so many women suddenly began tilting their heads and smirking at me, asking how I was “hanging in”—as if I was a neophyte in the midst of a kindly hazing en route to my status as insider.  This seeming clear and present identity space, however, is something that requires a very specific set of performances.  That is, the series of acts I performed from the time a bump began to emerge seemed to suggest the degree of success (or lack thereof) to which I had accessed the transcendent realm of Motherhood.

I’ll offer the punch line first.  I don’t own a crib.  The baby (now a little over a month old—or five weeks, if you’re doing baby-math) has never “cried out” anything.  The delicate balance of keeping him happy and getting work done often results in his being carried around in a sling or wrap that leaves my hands free to load the dishwasher or write this blog post.  Feeding him works according to supply and demand, which leaves us largely without any real schedule to speak of.  We use cloth diapers, which seems to save money and create less mess. There is no specific nursery space in the house.   These matter-of-fact realities about how the domestic dance is emerging are not done with intense deliberation on my part.  Often, I’m not really thinking much about them at all.  They are largely to do with my own very local interests where time, money, and energy are concerned.

But it’s been amazing to learn how quickly these little actions classify me for many as an “Attachment Parent.”  And this, apparently, is to be immediately and strongly distinguished in diametric opposition to Authoritative Parenting or approaches that would promote a clear structure, like the Parent-Directed Feeding advocated in the wildly popular (or infamous, depending) On Becoming Babywise.

Not too far into my pregnancy, I realized that the discourse on motherhood among insiders, while complicated and multi-faceted, often plays out in my own communities through battles like: strollers v. slings, formula v. breastmilk, and cribs v. co-sleeping.  And the accompanying judgments can be intense. Like this clip from 30 Rock that shows Liz Lemon’s ill-fated attempt at trying to buy “a girl’s bike” online:

These disagreements and delineations say as much about the commonalities among the various schools of thought as they do about their differences.  For example, I have received advice from advocates of babywearing who offered slings and wraps as a way to avoid the strollers, which they believe to be less beneficial (some would say clearly terrible) for both children and mothers.  The exact same conversations happen with moms who swear by their strollers—the tool of liberation for moms everywhere, they say—and who think slings are tantamount to foot-binding.

What these chats have in common is not only their ideological certainty but also their assumption that mothers are the ones who will be doing the real child-rearing.  It was a bitter pill to swallow for my interests in keeping up an active work life and maintaining a domestic division of labor.  What’s more, these conversations typically happened outside of work settings in the middle of a weekday.  Why does that matter?  Well, for many, being able to hang out with friends on a sunny Wednesday afternoon suggests a certain level of privilege that allows for a flexible work schedule or the ability to stay home altogether.  So, depending on what kinds of qualities we’re using to compare and contrast, my slinging and strolling friends might have way more in common with one another than, say, with women who make the same choice regarding baby-related mobility but whose professional or economic circumstances keep them at work during the day.  These brief anecdotal moments are chock-full of particularities related to gender, class, and region, just to name a few.

Interestingly, though, these mid-day conversations are indicative of a discourse that does want to invoke the practices of women with very different contexts—often in countries not its own—in order to validate parenting styles of choice.  In so doing, the very moms with whom I find myself agreeing on many issues—homebirth advocacy, baby-wearing, breastfeeding (if able) upon demand, etc.—often make use of a romanticized, exotic otherness to identify and defend specific interests within their performative spaces.  All the while, my cohort is able to applaud itself for our progressive stance on matters being debated among parents in our specific communities, even as a logic structure remains up and running that suggests certain groups or practices are somehow closer to nature or more authentic than others.  Thus, the promotion of certain ideas and issues thought not mainstream—perhaps even taboo—here in North America easily relies on cultural essentialism if not careful, deploying the notion of a shared, sacred and ancestral mothering impulse to do so.  For example, I’ve come across several texts talking about African women who wrap their babies onto their own chests or backs so as to more easily continue working, performing chores, etc.  Or, consider this article, written about breastfeeding practices and expectations in Mongolia.

In such examples (these are just a couple of many), the performance (wrapping or breastfeeding) is conveniently removed from the context in which women enact it.  While my own new-mom identification carries with it a distaste for the stigma that often comes with public breastfeeding, my guess is that—rather than some monolith called “Mongolian women” having accessed that sacred ancestral mothering impulse  that transcends time and space—there are probably practical and local reasons for longer-term breastfeeding in parts of Mongolia.  Those pragmatics may or may not be part of the daily grind for attachment parents like “us.”  But that is not really the concern of resources aimed at helping women connect with that authentic Mother thought to be in us all.

The same brand of universalism then gets applied to infants as well.  For instance, there’s the undeniably adorable Babies, billed as a “universal celebration of the magic and innocence of babies”:

No dialogue needed.  It is, instead, a photojournalistic feast on the order of the best in National Geographic-esque visual stimulation.  Babies are babies everywhere!  They navigate matters of food, shelter, and power/competition all over the world!  Sure… but how those navigations play out and what meanings they’re given vary widely.  In fact, the very claim that infants play out a universal script is itself reflective of a quite particular context.  So, while I (an introvert’s introvert) suddenly feel okay about flashing a knowing look at a pregnant woman in a grocery check-out line or unabashedly asking other women about how they keep up their bodies’ milk supplies, I process these phenomena of new motherhood through my own filter.  Does my status as a mother connect me with all mothers everywhere?  Well, that depends entirely on one’s criteria used for comparison. 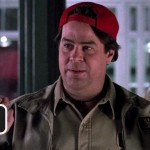 Speaking only for myself, when I see “Mother” with a capital “M”, the first thing that comes to mind is Dan Aykroyd’s affable conspiracy-theorist character with the groovy dance moves in Sneakers.