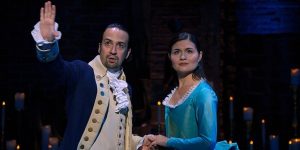 Like many in the US, I saw Hamilton for the first time earlier this month, when the blockbuster Broadway musical (originally hitting the stage in 2017) aired in movie form on the Disney+ platform.  The story of an orphaned immigrant (that is, Alexander Hamilton) coming to America to forge the country in its early days has generated scores of fans.  Those who have seen the show know that one among several factors setting it apart is the cast, comprised almost entirely of people of color.  In addition, the script is almost never spoken but is rapped or sung.  This has made it an incredibly timely musical in terms of addressing not just diverse racial representations, but such representations in the midst of the renewed resurgence of the Black Lives Matter movement.

But Hamilton has not been without criticisms, for even some who marveled at its artistry have lodged certain complaints about its storyline.  From what I’ve seen, only some of the most conservative readings of the show voice the obvious (Hamilton was white and rap wasn’t around, then).  However, the most common critiques that recognize creator Lin-Manuel Miranda’s artistic efforts tend to present a series of other issues in the name of setting the record straight. For instance, some claimed that Hamilton did little to fight racism in the sense that it re-created the stories of white men, not even feigning to attempt another historical narrative more closely connected with the lives of real people of color.  Others were concerned that several of the characters were made out to be anti-slavery advocates when they were, in fact, slave owners.  Still others wondered if the portrayal of Eliza Hamilton in contrast to her sister, Angelica, reinforced a racialized narrative of Eliza’s cultural “whiteness” (and thus acceptability).

What has been fascinating to watch as a scholar of religion is the way in which debates over Hamilton have proceeded much like debates over what are often called “sacred scriptures” or “holy books” in a variety of religious traditions.  What these have in common is that a beloved narrative is seen as a central authority for the social group in question.  As such, perhaps we can use the tools of critical inquiry that we often use in the study of religion to consider the significance of the public reception of this Broadway hit.  It might also be instructive to compare Hamilton to a film invoking an overtly religious narrative that also generated plenty of cultural commentary — Scorsese’s The Last Temptation of Christ (1988) — which was controversial for many reasons, not the least of which was its portrayal of a sexual Jesus.

One of the arguments that we’ve made over the years on this blog is that when social groups make appeals to the past, those appeals are always about the present.  In other words, the past is long gone, and no matter how much archaeology and artifact we have, it can neither be changed nor fully known.  Thus the only real use for “the past” is how we can put it to use now to meet our concerns and suit our interests, something true for all groups, not just religious ones.  However, one of the reasons why we spend time talking about this phenomenon in the context of religion is that for most religious insiders, the past in question is so deeply authoritative that subjecting it to questioning or creative license can seem to shift the foundations of reality itself, as naturalized through phrases like “God’s plan” or “divine will,” or other ways that religious narratives about the past are described.

What is interesting about Hamilton is that here we have a narrative of the past, but its construction and creativity are on full display; Miranda freely noted his desire to make a musical that incorporates a traditional story with a non-traditional presentation.  I would wager, though, that most of the people who watched Hamilton were not actually on the fence about whether the Founding Fathers were white, or whether they were well versed in rap, just like most Christians probably did not seriously think that The Last Temptation of Christ was the depiction of some secret, extra-biblical account of Jesus’ sex life.  Scorsese openly described the film as the exploration of ideas, and not a historical work.  Nevertheless, religious conservatives were deeply upset by the film, calling for boycotts and protests, but again, all without likely believing that history or even the Bible had actually been “rewritten,” so to speak.  In other words, despite the actual words groups use, the sentiment behind the claim is not so much “it didn’t happen that way,” (a claim that we often cannot prove, anyway), but “we don’t want it portrayed that way because that impacts what we do and how we are perceived now.”

Perhaps surprisingly, to some, the most important word in that previous clause is “we,” for very specific constituencies have very specific interests in how the past is portrayed. For the religious conservatives boycotting The Last Temptation, their interests were to keep forefronting Jesus as an asexual character who was without sin. For many of the theater and culture critics commenting on Hamilton, their concerns have been more with contemporary issues of racial justice and the degree to which the show helped or hindered that cause.

In short, statements about the past are almost always about very specific types of power in the present, something true across all media.  This portrayal of power should not be understood as a negative, but as a normal social dynamic, if not the central one.  Perhaps this is no better demonstrated than by thinking about all of the details in these movies that are absolutely historically questionable, unprovable, or simply made up, and yet inspired no controversy at all.   For instance, Scorsese talks about his decision to give Satan a British accent, a move he designed for American audiences who tend to think British accents sound authoritative.  In all of my reading on this film, I do not remember anyone taking exception to how Satan pronounced his vowels.  And as far as Hamilton goes, I never heard a single critic take issue with whether Alexander Hamilton could actually dance, which seems to be a quite similar question to whether he could rap (a query most definitely on the minds of some).

The point? That which inspires controversy or notice is that which taps into the power continuum in any given social moment.  Lest we think that these types of debates are really about some inviolable historical record, we should pause to ask which details are up for debate, what beloved social narratives they might disturb, and whose interests those portrayals serve.