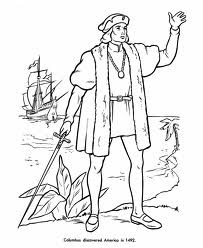 I am the parent of three children, two of whom are elementary school-aged.  As such, I have now twice been handed an image of Christopher Columbus (not unlike the one featured above) that they each have dutifully colored, which appears to be a requisite kindergarten activity at our local public school. Because of the historical evidence that details Columbus’s systematic torture and murder of the peoples whose lands he colonized, I have always found this exercise something akin to coloring a picture of Saddam Hussein or some other such figure.Perhaps in recognition of the controversy surrounding Columbus and the celebration of a day in his honor, the publishers of the coloring page that my children received inserted a caption under his image that reads, “Christopher Columbus: What kind of person do you think he was?”  Interestingly, the take-home pictures of George Washington, Abraham Lincoln, and Martin Luther King, Jr. did not ask that (let alone any other) question.

Beyond being asked to color a picture of someone who could be described as a mass-murderer, I suppose that there is another irony at play here:  the information about Columbus presented within the curriculum is hardly sufficient to even begin to digest the aforementioned question.  Outside of learning that familiar jingle (“In 1492, Columbus sailed the ocean blue”), they know little else about him besides for the name of his ships and about how he had something to do with the “discovery” of America.  Based on this information alone, one might presume that most children are very inadequately equipped to grapple with what “kind” of person he was.

My interest in mentioning this is to highlight the manner in which the stories that we often tell about our nation’s past and its relationship to our present identity are tales that must, by definition, be incomplete and only vaguely rendered.  Why?  Such stories have to embody a certain degree of flexibility if they are to support a larger, ongoing narrative that must itself adapt to the diversity and complexity of society while also creating the appearance of unity.   We cannot be too specific about what we mean when we reference Columbus, for specificity involves discussing historical details and personal attributes that I suspect few die-hard patriots would like to associate with their country.  It also means that what are interpreted as the more positive concepts associated with Columbus Day (that is, a generic tip of the hat to patriotism and great sales at the mall) become harder to justify.

Similarly, consider the experience that my second grader had this past week, on September 11th.  He has not yet encountered any sort of formal treatment of 9/11 at school except for the annual moment of silence that occurs on that morning (the significance of which he almost certainly doesn’t understand).  On September 10th, he was simply instructed to “celebrate our country by wearing red, white, and blue” the next day.  He was a little unsure why he was doing this (beyond the fact that his teacher told him to), but indeed, he wore precisely that, explaining his clothing as something “for America.”

Somewhat differently, my fourth grader received a more in-depth discussion of what transpired that day in 2001; it appears that in the state curriculum, fourth grade is the first time when 9/11 becomes a civics lesson in its own right.  While she was aware that people died, her knowledge of 9/11 was not particularly well-developed.  When she came home from school she told me everything she now understood:  some people from far away had flown planes into the Twin Towers, many people had died, and they watched a film about some children whose school had been displaced in the recovery process.  I asked her if she knew why 9/11 had happened – if that question had come up at all.  Her response was that no one had either offered or answered the “why” question.  She had come home eagerly hoping that I would answer it for her.

Of course, I recognize that there is wisdom in selectively discussing certain topics with children if only to prevent them from being constantly fearful or confused.  But this begs the question of why we choose to discuss such issues at all until children are old enough to understand their complexity.  The answer, I suspect, is that such powerful symbols like Columbus and 9/11 are not so important to us because of the “facts” of what transpired.  Rather, both instances are important examples of vague, albeit tremendously powerful, symbols that can be manipulated to mean whatever a culture wants them to mean in a given moment.  Such symbolic messages have become so critical to our present self-understanding that our children literally cannot become “one of us” without participating in that story.   If we take seriously that the manner in which we socialize children is a mere reflection of the values, concerns, and realities manufactured by the larger culture, then a pack of Crayolas and some color-coordinated clothing are far more than mere child’s play.

One Reply to “Coloring Columbus: On the Importance of Leaving Out the Details”