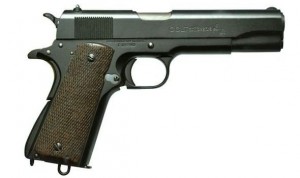 As a parent, I feel that I am constantly thinking about what can harm my children. I remind them to make eye contact with stopped cars as they walk across busy intersections, to take small bites and chew their food slowly as they eat, to not tip back in their chairs at the table, and so on. But I must admit that there is something unusually arresting about hearing my children talk about the “code red” drills that occur at their elementary school.  This is the term that the school uses to cue the children and staff to start a series of behaviors that are supposed to provide protection if an “active shooter” ever comes (which boils down to lights out, hide, and lock the doors). Hearing about this is not only terribly frightening, but it is also indicative of a very intriguing sort of way that we present reality to one another.

I’m interested in thinking about the gun situation in the United States as a useful scenario to demonstrate the power of a ubiquitous social narrative in creating a very specific, local phenomenon of great consequence. Things like walking, eating, and sitting (the behaviors I mentioned above in relation to my children) are normal states of life, while I think that we can all agree that gun use is less so. In this sense, the most basic fact that I think we must acknowledge in thinking about the gun phenomenon is that gun love is not “about guns,” per se, because most gun users — and here let’s restrict the conversation to handgun owners —  do not actually use their guns with any frequency, if at all. Guns are not like steak knives, cars, prescription medications, or bonfires; all of these can kill or injure, and yet all of them have some sort of practical function outside of their lethal possibilities. Guns, on the whole, do not. Because of this, it is important to think of gun love as something that operates first and foremost symbolically.

In her study of the rationale behind law abiding gun-owners’ decision to pursue concealed carry licenses, Angela Stroud notes that guns are primarily used by men. This is no accident, she observes, because the appeal of guns is marketed by the American gun lobby as an important facet of proper masculinity.

In her interviews with gun-owners, Stroud noticed three major trends emerge in the ways that gun-owners describe the roles of guns in their lives: 1) in justifying a gun as an instrument of safety, guns allowed men to reinforce images of themselves as masculinized protectors who could reassure themselves of their capacity to protect their women and children; 2) guns were often an attractive option to men who were aging and who therefore felt that their ability to defend themselves might be compromised, and thus guns gave them back the masculinity they had supposedly “lost”; and 3) gun ownership allowed these men to keep alive a narrative about the necessity of guns for “good guys” who needed them to fend off “bad guys,” and in this sense, was often a very convenient way that largely white men told stories about men of color or other “failed men” (the mentally ill, the coward, the effeminate or rejected schoolboy, etc.) who, they imagined, wished them harm.

In light of the fact that the NRA has recently proclaimed that the solution to bad guys with guns is “good guys with guns” (also the title of Stroud’s piece), she seems to be right on point.  But what is critical to Stroud’s research is that the very staunch worldviews that inspire gun ownership are riddled with logical holes. Most male gun carriers never have been, nor ever will be, in situations of actual, verifiable threat from another person, she notes, and many gun carrying men in her study admitted that their wives (who often did not know how to use a gun or refused to carry one) were far more likely to be in a position to defend their families based on the amount of time that they spent at home with children than the men were. It is questionable then, Stroud remarks, whether gun attitudes are actually about using a gun at all; her incisive conclusion is that guns are, instead, instruments to carve out a robust sort of masculinity rather than a tool used to accomplish a specific safety measure.

One could conclude that this is why we are, as a culture, so vulnerable to gun violence at the same time that a significant constituency describes guns as tools of security. I am struck by the manner in which American gun culture seems to operate as a strange inversion of rape culture. If “rape culture” as a term designates a series of cultural claims wherein certain attitudes about rape make it appear, to some degree, inevitable, then we can also talk about gun culture as a presumption about the inevitability of violent enemies and the presence of constant threat. In a twisted new reversal of the victim-blaming that characterizes rape culture – condemning rape victims for their rape because of where they were, what they wore, etc. – gun culture encourages everyone to think of themselves as a possible victim (as pre-victims, perhaps?) by enacting a fantasy that depends on a clearly delineated good guy and bad guy, and which provides moral rewards for those who are ready to imagine that enemies are always around the corner.

The dangerous irony here, of course, is that this sort of thinking often ends up being a self-fulfilling prophecy. I mean this in a more immediate sense (think Trayvon Martin) where anyone who is fearful will find enemies wherever he looks. To a more extended degree, however, the masculinist power that makes guns appealing has proven in some moments to be the very alienating, mocking, bullying force that has pushed many mentally or socially vulnerable young men to horrific gun violence themselves (think Columbine). And so, in both ways, the circle completes itself.

What this means is that guns let certain members of our society tell a very powerful story about themselves, so powerful that the rest of us tend to take that version of reality for granted. It is a deadly story, no doubt, but the reason why it is such a hard problem to tackle is because so many of us dearly love that tale.