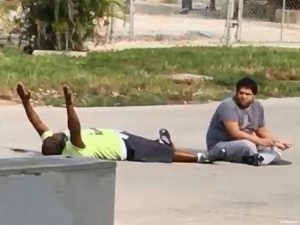 If you have read Susan Sontag’s arresting book, Regarding the Pain of Others, you’ll know that Sontag believes there is something unique about the way that a photograph — particularly a photograph that reveals suffering — is received by its viewers. This uniqueness is partially tied to the content of the image itself, but is also a function of how we, the public, think about images.

On the one hand, she notes, we judge images as something uniquely truthful in a way that we do not with words. Photographs seem like they’re portraying ‘just the facts,’ while we can more easily acknowledge that words are crafted, edited, tweaked. For this reason, the public is often disillusioned by the actual work that is involved in photojournalism, she remarks; that is, we do not want to be aware of the processes of thought, selection, and framing that goes on because we want our images to be ‘the truth.’ In this sense, “Everyone is a literalist when it comes to photographs” (47). And yet, she notes, we are terribly contradictory in this conviction, for we deny the power of photographs every day when they do not suit our particular purposes.

More specifically, Sontag is intrigued with how people deny the content of and/or are shocked by the images they see. Denial often occurs when photographs implicate us in the violence they portray (for, as Sontag notes, perpetrators of terrible acts will almost always argue that their atrocities are someone else’s fault, or things that the victims did to themselves (11)).

But denial also transpires when people refuse to legitimize the images they see simply because they are tired of seeing them. Here she addresses those who accuse the media of becoming a spectacle based on the sheer number of horrific images that are daily featured there. While Sontag is sympathetic with the enormity of certain social problems (and the overwhelming feeling that accompanies that), her critique is pointed at those who wish, instead, to see something else in the news, a desire that belies “a breathtaking provincialism” in so much as it is a comment that could only be made by someone who is not living in the midst of that suffering (110), for those who are living it cannot, of course, leave or ignore it. It is simply their lives.

All of this leads Sontag to conclude that someone who is genuinely surprised by the images of constant suffering and atrocity that surround them represents a failure of maturity, for there is an age after which one cannot deny any longer that this is what the world is like (114). After all, she notes, if we feel that we are losing some sort of capacity to respond to these images, or that our sense of compassion is somehow being blunted, isn’t a request for a more meager ration of horrific images really a sign of the fact that we aren’t having to live with them, for what suffering person actually wishes the world to know less of their anguish? For those of us interested in identity formation, what Sontag’s analysis thus reveals is yet another interesting example of how our reactions to others often says more about ourselves than the people or issues to whom we believe we are initially responding.