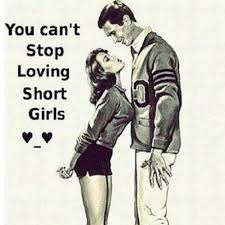 Although “short and cute” aren’t the first adjectives that I would usually choose to describe myself, they are among the more powerful identity categories that I deal with on a daily basis.  I have always been one of the smallest of my peers, occupying the front row of group photos and living life with most of my kitchen cabinets just out of comfortable reach. Having said that, I am not unusually short – I’m a little over 5’1”, and I wear a women’s size XS or S.  In other words, while I would never claim that my appearance is representative of the majority of women in my culture, there are still plenty of others right around my size.

Despite the fact that my appearance is not particularly remarkable, this topic still appears as a frequent theme in my interactions with others.  Why?  My sense is that this has something to do with the dynamics of gendered, heteronormative power and the identity markers upon which it depends.

Consider the word “cute,” a label often set alongside “short.”  While “cute” may seem to be nothing more than a complement, it’s a term with its own set of baggage.  It’s probably a hopeless task to disentangle the differences in meaning that are deployed in the words “cute” and “beautiful,” but I’ll go out on a limb and briefly suggest that while both might indicate that the bearer meets a particular aesthetic standard, “cute” is often associated with overt infantilizing tones — with inherent weakness, innocence, delicacy, or vulnerability (think how often we describe children and baby animals using the term).

In effect, “cute” can operate as the linguistic moment where weakness transforms into desirability.  You may be familiar with feminist scholar Catherine MacKinnon’s observation that, in heteronormative cultures, female standards of beauty are determined largely by men, and thus what is deemed attractive for women is usually a reflection of what maintains male empowerment, both physical and ideological.  This is, I suspect, why the ever present “Sexy Schoolgirl” Halloween costume returns year after year to the retail store shelves,  despite our culture’s general disdain for pedophilia.  The schoolgirl becomes “sexy” precisely because she is childlike, innocent, and vulnerable at the same time that she is sexually available.  In other words, her perceived powerlessness is an important piece of her desirability to the men who find her attractive.

As such, those of us who bear the label may agree that “short and cute” frequently operates as a something of a dismissal couched in a complement.  Because I am “short and cute,” inordinate attention is often given to both my size and appearance.  For instance:

While I wouldn’t suggest that these situations are universal, I’m sure I’m not the only “short and cute” woman who has experienced sexism through this particular labeling mechanism.  Much like a tee shirt that one of my children has (which is emblazoned with the statement “I’m not short!  I’m fun-sized!”), “short and cute” talk is not mindless banter, but is a recuperation of longstanding — if still, to most, relatively invisible — attitudes towards gender and power that masquerade as flattery, all in good fun.