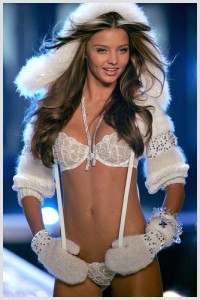 As I often point out to my Feminist Theory students, there’s a reason why Victoria has a secret, but Victor doesn’t. In other words, there’s a reason why women have “lingerie” and men have “underwear.” Although we’re clearly talking about undergarments, the words here matter. As might be obvious, the former term has a sexual intent behind it that the latter simply doesn’t. One could argue that what the model is wearing in the above photo has sex appeal because the consumer ultimately imagines its removal: lingerie is something you take off, while underwear is something you put on. And yet part of the allure of the lingerie above is that it must also be on to “work” – through the magic of underwire and spandex and every other sort of “suck it in, push em up” technology, the above body is simultaneously a manufactured one that the lingerie makes (a function perhaps desirable only to those who are non-supermodels). And here we come across another interesting double-standard in undergarment function, for I cannot recall hearing of any sort of mainstream line of men’s underwear that has a “tummy control” panel.

I find this notion of a double-standard in identification a really fascinating strategy at work, for it permits us to talk about things as if they are the same, and yet simultaneously allows for the careful marking of difference that can also, in certain contexts, accomplish complete erasure. Consider that there are numerous words used to denigrate women by appealing to their improper sexuality (whore, slut, etc.). Despite this, in American English, we have very few (if any) words that might describe a similar series of male acts that are not, at the same time, also quite funny. Put bluntly, calling a man a “man-whore” provides no degree of insult, which is probably why it is really only a useful phrase in comedy films and college parties.

The same sort of difference is accomplished in this Target sign: 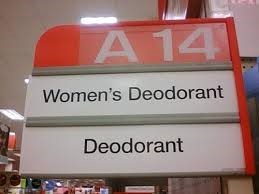 It’s clearly all deodorant, right? But the fact that women’s deodorant must receive special designation (all while the category “deodorant” is invisibly male) is a sign of another difference that’s supposedly not one at all. Of course, both men and women stink (and thus deodorant for them both). But because the symbolic baggage that accompanies the thought of stinky women (undesirable! unfeminine!) is different from that which is associated with stinky men (they’re naturally stinky — they’re strong, strappy, sweaty men!), the distinction must be made and the association with one party naturalized.

Feminist scholars and others interested in the politics of identity have long argued that the adjectives that we place before our nouns are of critical importance (“I see a woman doctor”; “Did you talk to the black man who came to the door?”), for if they were of ultimately little consequence in our social power dynamics, no one would feel compelled to list the gender or color of the aforementioned characters. The work of difference in the midst of purported unity, then, may actually prove to be one of those markers to which we should pay careful attention, for what they signal are those moments when the circuitry of a society’s power dynamics is laid bare.