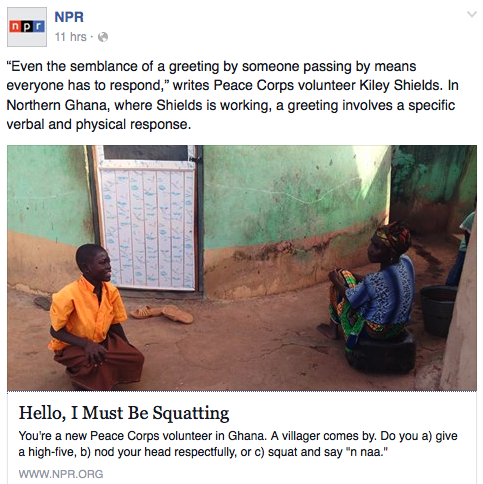 Last week I saw this interesting post, concerning an article written by a US Peace Corps volunteer stationed to Ghana. It details various ways in which greetings take place and the verbal and behavioral traits that attend various sorts of greetings.

While I understand the difficulty of not being fascinated by the novel, both the description at the top of the above photo (undoubtedly written by whichever NPR staffer got stuck with Facebook duties that day) and little nuggets like the above quotation read to me like observations made by someone who is unaware that none of this is all that new — someone who can’t see just how familiar the exotic is.

For while we certainly don’t squat when greeting someone of higher status, our hellos in, say, North America and Europe nonetheless involve a no less complex series of verbal and physical responses that would surely strike the uninitiated as curiously exotic. From the many ways of shaking hands (think about it, there’s lots of ways to screw this up) or

cocking the head back and raising the eyebrows while saying “What’s up?” as you pass an acquaintance of equal social status (not staying long enough to get any answer but wanting only to hear the question repeated back to you) to the controlled intimacy of both the bro hug and the air kiss (just once? once per cheek? Three times in Switzerland?! Which gender gets to kiss which gender? And do you actually kiss or just rub cheeks?)…,

well, we have all sorts of complicated things going on when we signal our recognition of someone else. And to the trained eye one could easily determine our social standing in a particular group just by the way we enter and leave it — what is said, by and to whom, and what happens with those bodies, those eyes….

For example, should you have enough context then you might understand that Michael kissing his brother Fredo was not just any old greeting.

Or consider how John Kerry was recently lampooned for his attempt to convey, what?, sincerity, perhaps grief or maybe empathy, when he traveled to Paris sometime after the killings at Charlie Hebdo and after the demonstrations — lots was going on in that late greeting (some of it a fail, admittedly, and some an apparent contest between the two greeters).

What I therefore find interesting in that brief blog post on Ghana is how the complexity and nuance of the familiar are normalized in the fascination with the strange; for only if we fail to see just how crucial it is to respond to a greeting here — even if you just repeat it back to someone, saying “How’re ya doin’?” without ever answering the question — would we find it noteworthy to point out how “they” are seriously insulted if their greeting is ignored.

So, the next time someone says “Hi” — whether a peer, a younger sibling, or a social superior — try walking straight by without acknowledging them, or, better yet, fail to send a high ranking dignitary to a unity march held by a wounded ally who helped you found your country in the first place, and see how that works out for you.