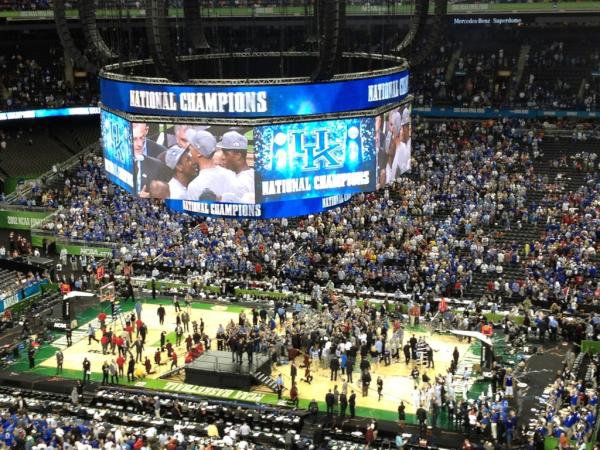 Being a basketball fan is almost automatic when you are born in Kentucky. As a Kentucky Wildcat fan, I certainly have enjoyed this perfect basketball season, but I have been a fan of the Cats in the less-than-perfect years, too. I even remember exactly where I was when Christian Laettner hit that infamous shot twenty-three years ago. If you’re over thirty and don’t know where you were when that dagger went through the heart of the Big Blue Nation, I am not certain that you can call yourself a true fan.

After the narrow victory over Notre Dame last Saturday, some of the celebration on Twitter struck me as  wonderful examples of many of the processes that my colleagues discuss here at Culture on the Edge. Celebrations of sports victories often include an assertion of distinction, taking personal acclaim and pride at the success of your chosen team. This claim to status, though, is only meaningful if people view that status as a scarce resource. If no one loses/is denied that claim to status, then it provides no distinction. In fact, fans not only claim distinction against those who supported the other team but often limit who can claim their own team’s acclaim. For some, those who never attended the school cannot claim the prestige in the same way that alumni can, even if they graduated decades ago. As I referenced in the opening, being a life-long fan or remembering particular events also serve to distinguish “authentic” fans from people jumping on the bandwagon, especially when a team is dominant. Knowing the players, the history, how many championships the team has won, all serve as border fences to distinguish and discipline true fans and thus those who have a greater right to associate themselves with the victory.

Because status is seen as a scarce resource that must be jealously guarded, any perceived sleight to one’s chosen team must be vanquished like any opposing team. Fans of a number of teams (not just Kentucky) have been denouncing anyone critical of their team as “haters”. A number of Kentucky fans complained on Twitter about the television announcers and their anti-Kentucky bias. Similarly, many Notre Dame fans were offended that Calipari would not declare Saturday’s game the toughest one that Kentucky has played this year, even though two regular season games were closer. A person’s perceptions of games, officiating, and disrespect are often a product of being a fan and the personal status that is at stake. The desire to believe what is more attractive to you and to reject what challenges your status is powerful.

Such efforts to compete for status and to defend an identification as a “true fan” are nothing unusual. The assertions of fans with teams in the Final Four simply make explicit many elements of identification relevant to religion, nationality, ethnicity, vocation, etc. In the US, some see any questioning of American exceptionalism as evidence of an anti-American perspective, and groups whose religion is dominant often do not appreciate perceived criticism or challenges to their dominance. In other contexts, identifying with a less dominant nation or minority religion becomes a sign of individual character and moral strength. “Despite the challenges, I still love my country/religion” is like the claim to be a fan even when the team loses. It reflects a different strategy in the competition for the scarce resource of status.

Now, you know what I will be doing Saturday and Monday, because I am a true fan. As such, I cannot end without pushing my own claim to status.