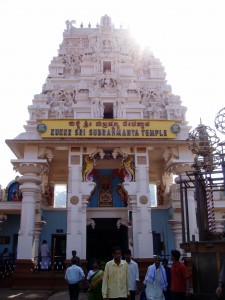 Human dignity and freedom are two values that many people reference in contemporary society. Like other terms that are useful in political and societal debates, people maintain competing definitions of these two terms. One person’s assertion of human dignity competes with another’s assertion of individual freedom.

Disputes over a festival at the Kukke Subrahmanya Temple in Karnataka, India, last month illustrate this malleability and subsequent tension. During this festival, one group of devotees (identified as high status Brahmins) consume a meal, and then the remaining food and their banana leaf plates are spread on the floor. Other devotees (identified as low status Dalits and indigenous “tribal” people) physically roll across the banana leaves. One understanding of the practice fits into the cultural constructions of status and purity, as the leftovers of a higher status person are pure, even purifying, while the leftovers of a lower status person are polluting. Because of the socially recognized status differential between those who eat and those who roll on the leavings, some identify this practice as an affront to the human dignity of the participants, as it reinscribes on each group their respective status. An op ed in the Bangalore Mirror concerning the practice related it to sati (burning of widows on a funeral pyre), declaring that this practice “is disgusting in this era of science and progress.”

As in previous years, efforts to end the practice encounter opposition from some of those identified as low status participants. Some see rolling on the banana leaves as providing them a blessing. In fact, an organization identified with the Malekudiyas scheduled tribe protested the attempt to end this event, in which some Malekudiyas often participate. They threatened to end their customary labor building the chariot used to carry the divine image at the climax of the larger festival. In other words, if they were prevented from rolling over the banana leaves and food leavings of the Brahmins, they would disrupt the traditional progress of the festival.

This controversy involves a contest between one conception of human dignity that sees the practice as reinforcing problematic status differences and another assertion of freedom of choice to participate in a ritual, between dignity as freedom from ritualized subjugation vs. dignity as freedom of choice and belief. However a person employs terms like dignity or freedom, the debate over the ritual, predictably, enters into other contests in which the ritual participants become pawns. The author of that Banglore Mirror op ed, for example, highlights India’s constitutional emphasis on promoting a “scientific temper” and concludes that the continuation of this ritual, and others like it, presents a challenge to efforts to present India as a superpower and technologically developed nation. His argument, thus, quickly moves from a concern for the participants and their dignity to broader national concerns over India’s image. In a different sense, some organizations working to raise the status of Dalits have opposed the ritual practices as hampering their work of social uplift, whether or not the participants want their version of social uplift, while others representing the Malekudiyas also promote their own leadership position and power as contributors to the festival chariot.

This concern over protecting the dignity of others who are voluntarily participating in a practice that some label demeaning resembles other debates, such as the contestation surrounding efforts to ban women from wearing a veil. Rather than being contests over universal values, such debates employ particular constructions of values to promote the interests and power of some over others, even as the rhetoric suggests that they are protecting a marginalized group.