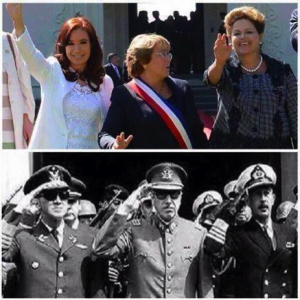 Russell McCutcheon’s blogpost yesterday analyzed the viewer’s role in reading this image (above) juxtaposing the current leaders of Chile, Argentina and Brazil to  three of the first members of the Chilean Junta: Leigh (Air Force), Pinochet (Army) and Merino (Navy), emphasizing the conservative notion of gender that appears to inform the reading of the image in ways that people often identify as progressive. That reading of the image that McCutcheon analyzed also overlooks the strategic production of such an image. 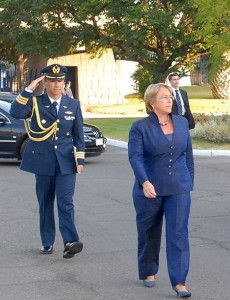 Whomever juxtaposed those two photos made obvious choices about what photos to use.  For example, a different image of President Bachelet of Chile appears, in my reading, a bit more authoritarian and thus less of a contrast to the image of the leaders from the 1970’s.

In discussions of American politicians, we are continually reminded how scripted most images of politicians are. I suspect that each of these leaders, as successfully elected politicians, not only have made the compromises required with other powerful figures that McCutcheon references but also have carefully crafted a particular image of themselves for public consumption. With the history of dictatorship in Latin America in the past fifty years, I suspect that each president has thought about the type of contrast, in both substance and appearance, that will be beneficial for their election and application of power as president. So, the softer image that seems central in the juxtaposition reflects deliberate choices, where these presidents may in fact be using gender stereotypes as a tool to establish their image in order to succeed as president, and thus break one component of those gender stereotypes. The processes of identification and comparison are strategic, not simply innate in those elements (whether images or people) representing themselves / being represented.

In this way, the reading of progress within the original juxtaposition of images, on multiple levels of strategic selection of the viewer, the comparer, and the subjects in the image, reinforce aspects of the very stereotype that the narrative of progress assumes is obviously being undermined.

2 Replies to “Expanding A Woman’s Touch”