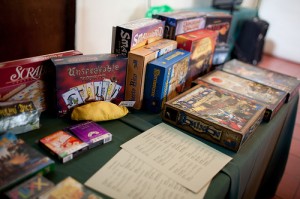 Most nights, my family plays one of a variety of table games during supper. So it makes sense (as I construct a coherent personal narrative) that we have begun thinking about play and looking at Game Theory, including a classic piece from Roger Caillois in Man, Play, and Games (originally published in 1958, English translation 1961) where he asserts

Rules themselves create fictions. The one who plays chess, prisoner’s base, polo, or baccara, by the very fact of complying with their respective rules, is separated from real life where there is no activity that literally corresponds to any of these games.

His interest in setting apart play from “real life” is a similar move to discussions of the separateness of “religion” and “ritual”. The rules prescribing a prayer before a home shrine, a chess game, or a procession for Our Lady of Velankanni in south India each can be described as setting the activity apart from mundane existence.

The issue, though, is that rules prescribe all of our activities. What side of the road that I drive on is arbitrary, yet quite useful. But we don’t talk about that rule as setting apart driving from other mundane things in the same ways that we describe a game or a ritual. Since determining that particular rules, whether labeled game rules or ritual prescriptions, distinguish an activity from other mundane, rule-bound activities does not reflect something inherent in those particular rules, the analysis of the interests that inform someone’s determination that certain rules create something different becomes a particularly intriguing aspect of studies of human practices.