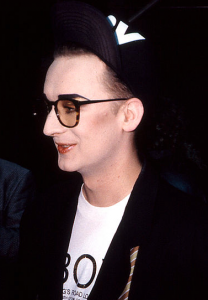 Boy George, the lead singer for Culture Club, a British pop group in the 80’s with hits like “Karma Chameleon,” recently released a new album that includes the song “My God”. (As you can see in the video below, he looks different now, though he continues to maintain a unique style.) “My God” contrasts two mirrored narratives. In the first, a person hands Boy George a religious tract and tells him, “Jesus loves you, don’t you know.” In the second, Boy George is in the opposite position, telling another person, “Jesus loves you, don’t you know.” In both cases, the recipient’s response is to shake his head.

According to an interview with the artist, the first vignette comes from an experience when someone attempted to convert him in a bar. He did not respond positively at the time, but his response has mellowed since then (though he does not seem to have converted). In the song he tells the proselytizer that his own existence is dependent on having “faith.” These assertions, despite his greater tolerance now, raise the question, why in the second vignette does he repeat to another person what the proselytizer said to him?

Even though the words are almost exactly the same in the two vignettes, I surmise that Boy George uses terms like God, Jesus, faith, and Lord, in different ways than the proselytizer. The chorus suggests this distinct usage, saying “My god is bigger than your god,” then admonishing people to “know what your heart is for.” Perhaps it is my reading, but it does not seem to be a celebration of traditional conversion or evangelicalism. One critic similarly sees these passages as “skewer[ing] sanctimonious people of faith.” Ultimately, though, I don’t know what he intended, since the meaning of terms are never fixed.

This difficulty in interpretation is not limited to poetic assertions. Terms have multiple possible meanings in any circumstance. Although communication relies on common recognition of meanings, too often we do not consider if another person is using a term in the same way that we understand it. Whether in reading a text or interview statements or survey responses, the human sciences face this challenge of the multivalence of terms. Assuming that another person means the same thing that we mean when using particular terms often distorts conclusions, whether the discussion focuses on religion or politics or aspects of one’s identification.

Photo by Harald Bischoff (Own work) [CC-BY-SA-3.0], via Wikimedia Commons

One Reply to “What Does God Mean?”