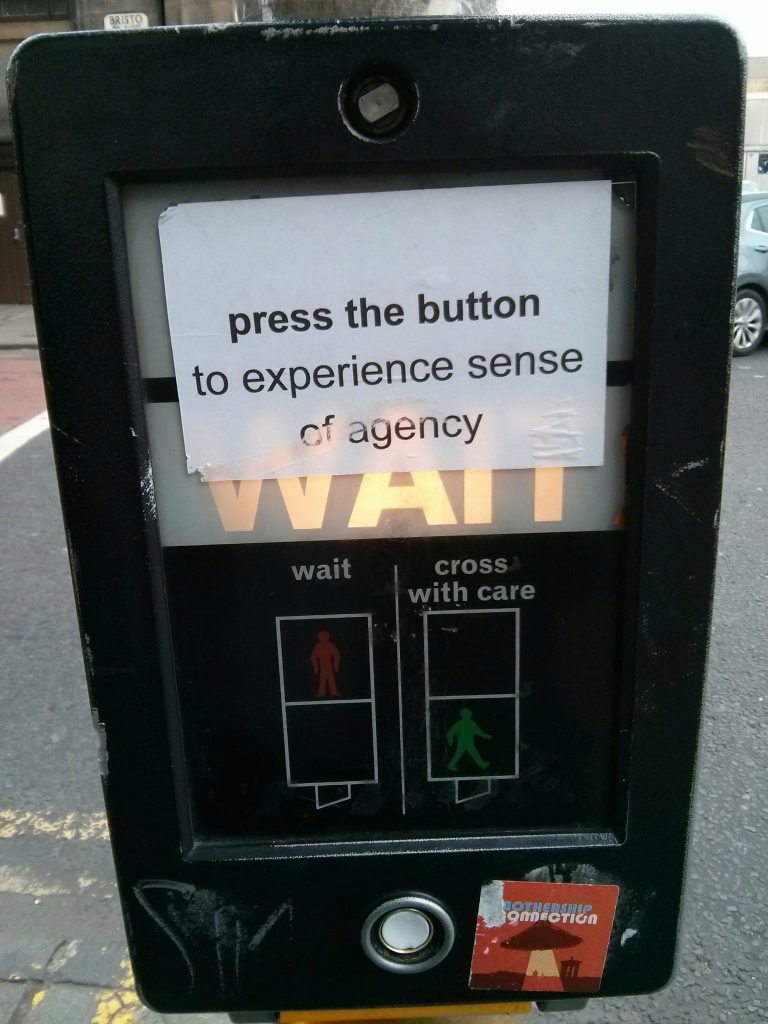 Many of the buttons that we are routinely invited to press as we go about our lives — from door close buttons in elevators to office thermostats — don’t actually work, but are artifices serving only to provide that experience of a sense of agency. Indeed, according to the BBC, ‘Edinburgh has roughly 300 traffic junctions of which about 50–60 are junctions where the green man comes on automatically.’ And this is the case in many other cities across the world. These buttons sometimes work, sometimes don’t, never work, work at varying intervals at different times, and so on. Of course, this doesn’t mean that the buttons aren’t ‘working’, but that they are doing a different sort of ‘work’ than what we might first expect. They provide a sense of agency. This is not unlike the ‘work’ done by social surveys.

The 2011 Scottish census asked respondents the following: ‘What religion, religious denomination or body do you belong to?’ Similar questions were asked in the censuses in the other constituent nations of the UK, with respondents being reminded that this question is voluntary, presented with a number of pre-formulated options (including ‘no religion’), and given the option to write in their own response if preferred. The labels for the tick boxes have been predetermined according to some criteria outside this act of identification. Idiosyncratic or insufficiently numerous responses will be grouped under ‘other’. And even responses of ‘none’ have resulted in the construction of a social group — the ‘nones’ — with many within and outside the academy rushing to imbue it ‘with a material face, social interests and political persuasions’ as if it had always been there (Ramey and Miller 2013). ‘Answer this question to experience sense of agency’?

Of course, just like you can choose to not press that button at the pedestrian crossing, you can choose not to answer this question. But just as that green man might appear automatically despite your ‘inaction’, so too might you be categorized by those analysing survey data despite your non-response. In Northern Ireland, the particular history of the region has led to significant state interest in identifying members of the population as belonging to either the ‘Protestant community’ or the ‘Catholic community’. Indeed, this interest is such that employers are required to monitor which ‘community’ their employees identify with.

If it has not been possible to make a determination of community background because, for example, the employee did not return the monitoring questionnaire or indicated that s/he was a member of neither community, you are strongly encouraged to use the fallback or residuary method of monitoring. The residuary method permits employers to use other written pieces of information provided by an employee, which can give a reasonable indication of community background.

Employers can then use information such as name, address, schools attended, sporting or other leisure pursuits or interests, to assign employees to one or other ‘community’, even if the employee has not filled in a form or has indicated that they belong to neither ‘community’. ‘Decline to answer this question to experience sense of agency’?

So, next time you approach a pedestrian crossing, or are presented with a survey, maybe you’ll press the button, maybe you’ll answer the question(s)… or maybe you won’t. Those with panoptical vision will still discipline and punish, move you around the cityscape, and place you into categories not of your choosing, according to criteria outside your control. But at least you’ll still have that sense of agency.

One Reply to “Answer this question to experience sense of agency”