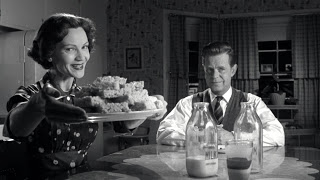 In Religion & Society—my introductory religious studies course — I regularly use the 1998 comedy Pleasantville to engage in a discussion about how we’re socialized to actively seek conformity to the existing social order. The film is about two teens — David, played by Tobey Maguire, and Jennifer, played by Reese Witherspoon—who are magically transported from the 1990s into a 1950s sitcom; they immediately begin to chafe under the social expectations of small town life. As they start deviating from the social norms of the fictional sitcom world (and encourage others to do so as well), they disrupt the life of the entire town. (If you haven’t seen it, the trailer is below. Note: there are spoilers further down.)

The film is all about the internalization and breaking of social norms — that is, social reproduction and contestation. On the one hand, life in the invented TV town is unrealistic and absurd: there are no toilets in the bathroom (because people in 1950s sitcoms weren’t shown defecating), their parents don’t know what sex is (because sex never comes up in programs from the 50s), fire doesn’t burn, the basketball team never loses a game, etc. On the other hand, the absurdity of the way of life modeled in the sitcom doesn’t prohibit the internalization — by the TV audience — of the social norms modeled. At the end of the film, after David and Jennifer return to their “real” world, we see David’s divorcee mom sobbing because she internalized exactly the sort of social norms she presumably learned from television shows like this one as a child (women are supposed to be married, have a perfect home, perfect children, white picket fence, etc.). She’s thoroughly ashamed of herself for not living up to the model she had internalized.

But shame is not the only response shown by the characters in the film when deviating from the norm. Some experience deviance as pleasurable and liberating, and others respond to deviance by attempting to restore the status quo via ridicule, shaming, new community regulations, or even violence. The film tends to present the responses to change as falling on one of these two sides: those who are bold and transformative, and those (cowards?) who want to keep things the same. It is not always so simplistic though; some of those who stand to lose (privilege or power, for instance) from social transformation are presented as pitiable at times. As David and Jennifer’s TV mom leaves their TV dad, their father is left confused and lost, not knowing how to cook or clean or care for himself alone.

Much of the film advances a sort of liberal ideology: desire is deep inside you, needs to come out, although its fulfillment is often blocked by people who are cruel or wrongly controlling. In those scenes that fit with this ideology, deviance from social norms is experienced as pleasurable and liberating.

On the other hand, there is much in the film that is in tension with this ideology. It’s clear that desire don’t simply come from deep within, but rather has its origin in part from the socialization process: the movie is itself a commentary on the effects of television itself in creating (potentially tragic) subjects of a certain type. The two most telling and poignant scenes in the movie are the parallel ones where David speaks with his two moms, both of whom are crying because they’re ashamed of their own deviance. In the first (see the clip below), David helps to put gray makeup on his sobbing TV mom after she turns from black and white to color, in order to help her appear to conform and “pass” as normal once again. Later, at the end of the film, he does the reverse: he helps to remove makeup from his “real” mom, all the while telling her that it is okay not to have the life to which she once aspired. Both of those women do not at all experience deviance from social expectations as liberating; on the contrary, they’re so deeply ashamed and confused that they’re paralyzed.

In our class discussion I point to how the liberal model of deviance as liberating is highly problematic. Most of us are more often like David’s two moms when we break social norms we’ve deeply internalized — we experience it as disconcerting and shameful. The most effective social controls are the ones that invite us to police ourselves.