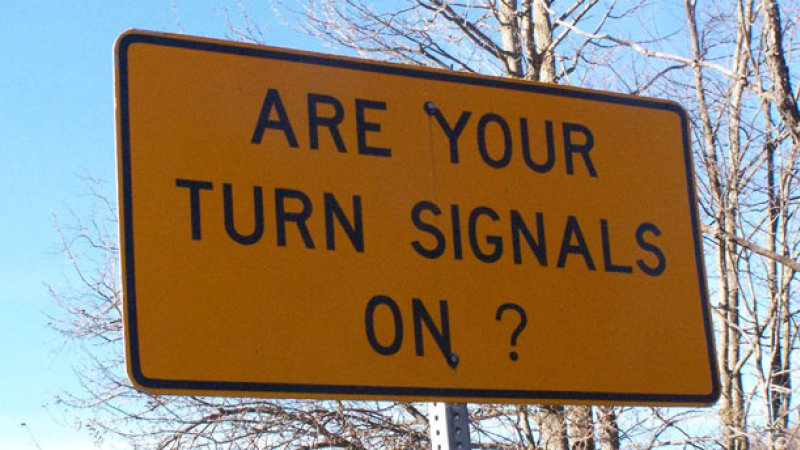 Like that vestigial organ, the appendix (long thought to have little utility), a car’s turn signals — or what I grew up calling blinkers — seem no longer to have any function, making them a bit of survival, in the classic anthropological sense, from an earlier but now bygone era. For the drivers I mostly encounter here in Alabama seem not to have any need of that little lever over on the left of the steering wheel.

The curious thing, then, is why cars still have them.

I think we learn a fair bit about a group by considering whether its members think telegraphing their plans to others is a worthwhile thing to do — like when they’re changing lanes or turning at that corner up ahead. So, while at a stop sign, wanting to turn right out of my neighborhood, and looking to my left at the busy oncoming traffic, waiting for my chance to go, I often think about this when a car that had been approaching me suddenly turns down my street without signalling — I could have gone if they had, of course, synchronizing our moves; but, traveling down their route, to accomplish their goals, seems not to have included considering how those goals impacted mine.

It strikes me as curious that, when it comes to that massively coordinated and highly regulated activity we call driving, we all seem to assume that we’re each isolated in hermetically-sealed bubbles that never interact with anything else in the world (possibly explaining road rage: the emotional response when our desires are impeded by others) — something all the more ironic given how, when online at least, social media has taken us in the exact opposite direction, where collaborating and sharing is all the rage.

While I’m sure we see this all over the place, I can only talk for where I am, and thus where I mostly drive. Sure, I see turn signals used now and then but, generally speaking, that little lever on the steering column is a useless appendage for many drivers; so I await the day when, much like the cigarette lighter or a built-in 8 track player, it just disappears from cars altogether.

Maybe that’ll happen around the same time as they quit telling us how safety belts work during pre-flight safety talks — itself a vestige of a time when they weren’t standard in cars and thus worn by few.

And when that day does come, I’ll sit and nostalgically recall a time when we thought it was important for others to know where we were intending to go.