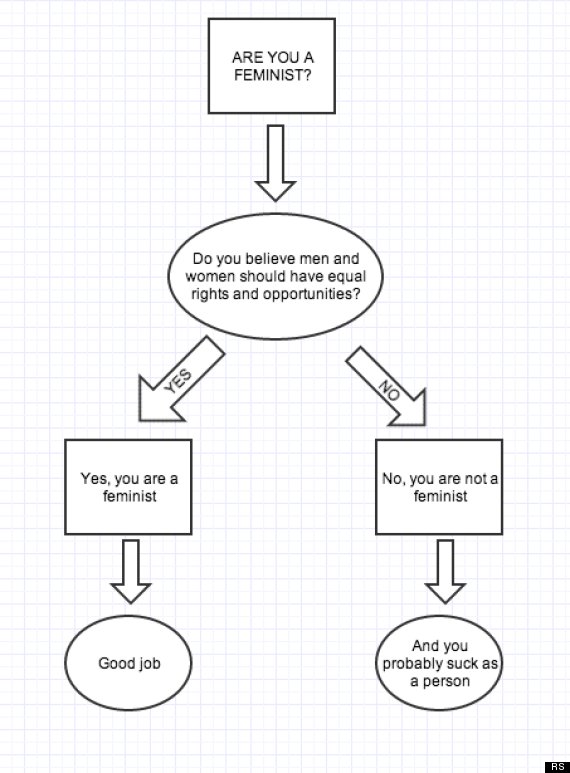 This old image recently made the rounds again in my Facebook feed, and I shared it myself. It got me into a little bit of an argument on one of my friends’ wall. The objection was along these lines: if we water down “feminism” to gender equity, which pretty much everyone can agree to these days, then it becomes meaningless—it’s not substantial enough of a vision to drive a real agenda.

Of course, in part this criticism is correct: trimming down feminism to gender equity results in shaving off perhaps its most important elements. Despite this, what if we viewed this as a rhetorical identity game—as just as another piece of propaganda in the war against patriarchy—in which case it’s perhaps supposed to be rhetorical rather than substantive?

Given my own sympathies, this image appeals to me for the following reason. In many contemporary circles “feminism” is a bad word. However, if we can get opponents of feminism to re-identify themselves as feminists (as this image encourages, and superficial as that may be), that might perhaps permit those more radical feminists to be seen as potential allies rather than obvious enemies. That is, this might be just a rhetorical ploy designed to reorganize identities, sympathies, and antipathies, such that more progressive feminists are not automatically taken to be on the side of the devil.

Of course, this tactic might not rhetorically work in all instances, and there might be better rhetorical games to play once we radical feminists are behind closed doors rather than in the public square, but I find that among my students it has a perhaps limited but significant usefulness.

On the other hand, part of my job is to show students how these rhetorical tricks work: in a sense academics are like the magicians who show the audience how the illusion works. Pointing out to them that this is a rhetorical shell game might undermine the goal I stated above, but I suspect that if my students are capable of understanding this shell game then they can also understand the shell game that equates “feminism” with the devil.