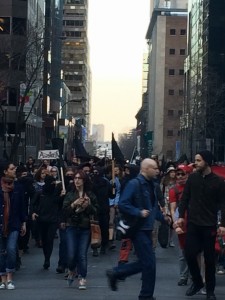 While spending a few days in Montreal, my partner and I (and our 16-month-old) were detoured several times while walking back to our hotel from an event at McGill University (though I did manage to snap a few pictures of what was going on, which I’ve included in this post). It was May Day, which many may associate simply with maypoles and flowers, a la Guinevere’s pastoral frolicking in Camelot, but which is also International Workers’ Day—a celebration and reminder of the important roles played around the world by those in working classes who often go forgotten in conversations on public policy and legislative prioritization. Of course, some tend to think of the September Labor Day in the U.S. as a day off and a chance to toss some burgers on the grill. But the May date for International Workers’ Day was chosen in the late 19th century to commemorate the so-called Haymarket affair of 1886, which began as a group of workers demanding an eight-hour work day and protesting the deaths of some workers the day prior at the hands of the police during what had been an nonviolent rally. When someone in the crowd tossed a bomb during the demonstration at Haymarket Square, the police began shooting. Eleven people were killed, and many were wounded.

Last week on May 1, downtown Montreal saw the protests and rallies that have become annual occasions to articulate the concerns and interests of workers and anti-ca 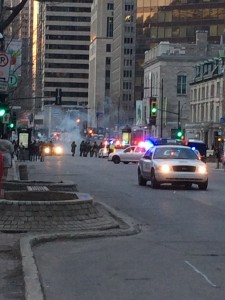 pitalist demonstrators. Early in the day, thousands across Quebec marched in protest of the power of big banks and of what they see as the unjust austerity measures taken by the provincial government that have been cutting budgets in educational and public service sectors. Later in the evening, however—from around 7-11pm—the protests that caused us to reroute our way back to the hotel and, at one point, dip into a café for a little over an hour to keep our toddler out of the fray resulted in 84 arrests, most of which were in response to protesting without a permit. Marches were led by folks who used black bloc techniques, but many of the people demonstrating were unmasked and simply carrying anti-austerity signs. Police and civilian cars were damaged, people were injured, and pepper spray and tear gas were shot into the crowds.

I’ve witnessed and participated in marches and demonstrations on various issues—sometimes in big cities, and sometimes in small/local contexts—but I’ll admit that I’ve never seen police firing tear gas. To say it was unsettling would be a completely inadequate understatement, and yet I also haven’t figured out how to articulate the sense of fear and threat created by watching authority figures “control” a situation with force. I was concerned about protecting my son, as families and bystanders were reported to be among those caught in the gassing early in the evening (when we were walking).

One of the interesting ironies about the May Day demonstrations is that the very police who were breaking up the anti-authoritarian protests have been protesting governmental authority themselves recently. Unionized police officers in Quebec have no power to strike or negotiate their terms of pension and employment. In specific response to proposed changes to pensions, they have since last summer organized simultaneous sick days, begun sporting camouflage pants and red ball caps, and adorned their police vehicles with stickers calling for free/public negotiations. During this brief recent visit to Montreal, I even saw the front of a police station itself decked with those same stickers. Here’s just one example from the May Day protests of a fire truck that was one the scene: 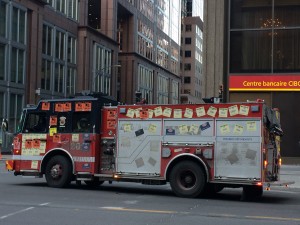 While some see this as harmless rebellion by disgruntled municipal employees, others view the move as a threat to the image of authority thought to be projected by police. In one article describing the city of Sherbrooke’s formal grievance against its police union, the argument was articulated by chairman of Sherbrooke’s executive committee Serge Paquin like this:

For us, it’s a question of the image of the city and of the police service, considering the nature of their responsibilities. They are supposed to embody authority, law and order…I think dressing in multi-colour clothes like that does not tend to protect the image.

The multiple and competing levels of dissent—the anti-authoritarian May Day protestors being physically controlled and, at times, assaulted by sticker-and-camo-clad police who were themselves in the middle of their own anti-authoritarian struggle—showcased the ways in which dominance and marginalization operate on endlessly sliding scales. And that got me thinking of Slavoj Žižek’s take on forms of violence. Žižek claims that the overt, or “subjective” violence that we see with a clear target and/or aggressor is not the most dangerous threat facing people. What should instead get more attention is the “systemic” violence that results from sociopolitical and economic structures maintaining their status quo. So, the violence as administered by the police themselves—while something that, to be clear, absolutely warrants critique and protests in its own right—is only symptomatic of broader systems of authoritarian control that people experience globally on a daily basis and that have become so ubiquitous as to be normalized into invisibility.

This is why the image of authority that the police are seen to project is what matters to Paquin. Indeed, this image is exactly the capital with which Montreal’s police and firefighters are trading in poking fun at the formality of their public roles by altering the uniformity of their dress and vehicles. Suddenly the cohesiveness of the group exerting force is splintered, and “the police” don’t appear (literally or figuratively) as a single authoritative body.

I am not at all suggesting that the skirmishes between the police and protestors without a permit—or, as we have seen in the U.S. recently, police and people for whom there is no probable cause to stop in the first place—don’t matter. Indeed, these confrontations can and do result in people’s deaths. May 1, of course, also saw in Baltimore formal charges brought against six police officers involved in Freddie Gray’s detention and ultimate death. The fact that a black man had his spine crushed before the news turned its attention to the kind of subjective violence that Žižek discusses is, clearly, a huge part of the problem with how notions of authority, threat, and resistance so often come to be identified in the first place. Rather, what I am suggesting is, in the example of Freddie Gray, a focus on the authoritarian violence with which Gray’s running from the police was greeted can run the risk of distracting from the more structural violence that was at work in the look exchanged between Gray and the police that caused him to feel threatened and begin running at all. This violence—present at the intersections of racism, economic exploitation, and the disproportionate incarceration of people of color in the prison industrial complex, just to name a few factors—is the more systemic sort of violence at work that is harder to see and is, with the rhetorical moves of “just a few bad apples” arguments so popular in media and municipal outlets, more difficult to address.

What the buses packed with police in full riot gear illustrated on May Day in Montreal is not a simple dialectic of good v. evil (on either side of the ideological or political fence from which one might approach such a debate). Instead, they showcased one form of violence between two groups who identify themselves as marginalized in one way or another—a form of violence that ironically helps distract the viewing public from institutional and endemic violences that are enforced silently…and with seeming consent.