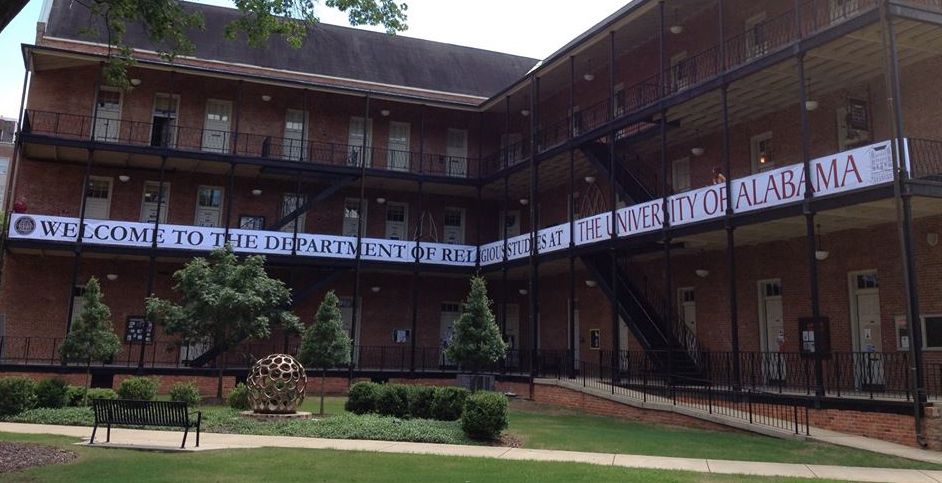 The inevitable moment when people I meet for the first time ask what I do tends to be a bit of an awkward one.  It goes something a little like this:

“So, what do you do, Merinda?”
“I’m a religious studies professor at the University of Alabama.”
“What sort of stuff do you work on?”
“I’m interested in how and why people make authenticity claims… I focus mostly on these claims in relation to gender, race, and the South.”
“…wait, but didn’t you say you’re in a religion department?”
“Yeah.”
“So that’s the kind of stuff you can study in a Ph.D. program in religion?”
“Well, sure! My Ph.D. is in English though.”

It’s at this point that most people change the subject. But for those who act interested in how it happens that someone with an English degree is doing her teaching and research in a religious studies context, I try to explain the following.…

One the one hand, no, I never expected that I’d wind up in a religious studies department. Like so many in my graduate cohort, I thought the name of the discipline was also the name of one’s career path. Sure, people like talking about “interdisciplinary” scholarship, but even now, I find little consensus or clarity about what that term means.

On the other hand, I think scholars make quite small our studies and interests when we reduce them to the data to which we apply a set of questions. If the academic study of religion is about having an ethnographic expertise in the history and language of this or that belief system, then sure, I’m no more a scholar of religion than I am of botany. But if the work we do as scholars of religion is to do with being curious about a taxonomic category (in this case “religion”) — how it’s used and by whom for what reasons — then I don’t see how that’s so different than using this or that novel or poem to look at the ways in which a trope like “masculinity” is utilized and contested, for instance. In either case, it isn’t what the scholar is looking at that matters so much as the questions asked about it and the method of inquiry used.

My theory seminars were always my favorite classes in grad school, but it wasn’t until I began writing my dissertation and had to choose the texts to which I’d direct my attention for the next couple of years that I really got the fact that it didn’t ultimately matter what texts I chose. Sure, I had my favorites, the books I returned to again and again or found productively troubling…, but that is expressly about my own tastes and what I like to read, not about the obvious texts to use in a particular strand of literary criticism. What’s more, as I got further into the project and began making the rounds on the job market, I found a far easier and more accurate answer to the question of what I was writing to be about my approach rather than my topic. Some of the search committee members who interviewed me said bluntly this made me difficult “to place.” Even when job ads mentioned interests in candidates with “critical approaches to gender” or training in postcolonial theory, I found quickly that many schools nonetheless we’re really looking for someone to fill the slot of a Shakespearean, or an Americanist, or a Chaucerian, etc. I wasn’t all that surprised…. Nine ads out of every ten said as much.

This is too often the case for departments within the Humanities, I think. Religious studies is no exception. As Aaron Hughes and Randi Warne discuss in their Bulletin for the Study of Religion piece, “Death by Area Studies“, departments are often looking to fill their ranks with area specialists. Academic disciplines thus go about the business of perpetuating their own authenticity claims, suggesting clearly knowable content relating to a certain time period, region, author, or what-have-you. But I was lucky. I met the folks working in the Department of Religious Studies at the University of Alabama.

Suddenly I was talking to people who pressed me on the how and why of my research interests rather than the what. We certainly don’t all agree or have the same approach. But we do largely share a commitment to thinking seriously about methods and critical tools with which we approach our teaching and research. What that means for me personally is that I am able to extend my basic approach to authenticity and social order/power to all sorts of data sets without fear of stepping outside my disciplinary classification. What it also means is that, when people ask me what I do, I’m able to say, “I’m a religious studies scholar.” Their confused responses are really what present the perfect moment to explain what it is I do: I think and write about how people resort to and rely on authenticity claims…, like those we make about disciplinary designation.