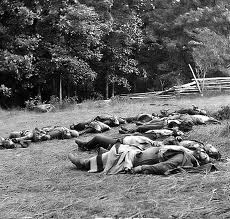 This month marks the 150th anniversary of the Battle of Gettysburg. Gettysburg is remembered as one of the most pivotal moments in the United States’ Civil War, in part for the way that momentum shifted towards the Union forces, but also because the largest number of lives were lost there than in any other battle in the conflict.

I was recently listening to a local radio talk show that was interviewing the author of a new book on the battle. The author described the Gettysburg site (now a national park and major tourist draw) as “hallowed ground,” infused with a sacred aura, because of the sheer number of lives lost there. When the phone lines were opened up to the audience, many of the show’s callers remarked on the “haunting” nature of the Gettysburg site, and one caller in particular (a self-described stoic) claimed that he found himself sobbing uncontrollably when he entered the site, a response he contextualized as an instinctual reaction to the sadness and the death that permeated the landmark. He was careful to note that he had never felt anything like that before in any other place, an evaluation with which many others on the show concurred.

These descriptions of Gettysburg show the critical role that context plays in crafting experiences that seem so deep-seated that their roots are beyond question. On the simplest analytical level, we might observe that those who contributed to this conversation were making the rather basic claim that the physical site of the battle holds distinction because so many died there – it literally reeks, some might say, with the emotions of death. In this equation, death (and particularly, mass death) unearths something called “sacredness” and “hallowedness,” two categories that were so naturally obvious to those engaging the labels that their precise meaning did not necessitate discussion.

It seems, however, that if Gettysburg had been left an unmarked, grassy field that remained uncontextualized as a part of a nation’s (and by extension, its citizen’s) histories, then it would likely conjure no emotions at all. Realistically speaking, those of us who live in a locale that has ever supported a population of any size are constantly walking, jogging, shopping, and simply living directly on the geographical sites where others – perhaps many, many others – have long ago died. If we go back far enough, most everything is a cemetery, after all – the very science behind the earth is that it is comprised of decomposed life. Despite this inevitability, though, most of us manage not to feel anything out of the ordinary as we pass through the day, if only because we don’t anticipate that we should. In other words, that context is not a part of our social consciousness, and thus not a part of our personal narratives, and thus not even a piece of data in our minds, the relative “sacredness” of which we might evaluate.

How and in what context emotions are constructed is, then, a rather complex social process. To be very clear, this is not to say that those who visited Gettysburg were not feeling real emotions, nor that they were not sincerely moved by whatever it was that they experienced there. Rather, it is to suggest, in the vein of Durkheim, that the emotional experiences that help create our perceptions of reality (and the labels we use to describe it) are not inward impulses that give away deep-seated truths as much as they are learned responses to the values that cultures embrace – and thus pass on – to their members.

I suspect that Gettysburg produces such emotions because the story of the Civil War is a well-rehearsed, critical part of the American national narrative that has been fundamental not only to politics past and present, but to everything from the nation’s religious history and racial demographics to its real estate patterns and culinary preferences. In this way, many of those who visit Gettysburg have been trained to see the site as a place overwhelmed with emotion only because Gettysburg is a part of a critical narrative on American identity.