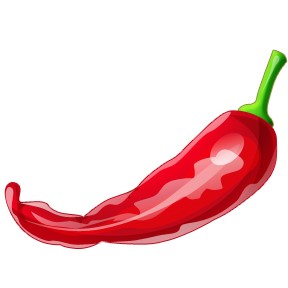 “If you’re not sexy, you might want to be easy.” So wrote David Epstein in an Inside Higher Ed article written about the website ratemyprofessors.com, which allows students to provide public feedback about their professors. In addition to reporting some basic information like the student’s interest in the course material and their perception of the necessity of the textbook, class attendance, etc., each student grades their professors by providing feedback on three major scales:  “Helpfulness,” “Clarity,” and “Easiness.” A fourth measure, “Hotness” (symbolized by a chili pepper), is awarded when students deem a professor suitably attractive.

My hope is that the thoughtful person would see that rating a professor on the three main measures is already a problematic way to evaluate an educational experience, but my interest lies more in thinking about the significance of the chili pepper designation in light of the other markers. What Epstein’s pithy line references is data indicating that the more attractive a professor is perceived to be by his/her students, the more likely he/she is to receive a better grade on RMP, much in the same way that easy graders also receive high marks. In the same vein, a recent article indicates that the gender of the professor in question largely determines the adjectives students use to describe that professor on RMP, with students more likely to evaluate their male professors in terms of their perceived intelligence, and their female professors in terms of their perceived nurturance. This reinforces yet another study’s findings that “hot” (that is, “chili-peppered”) male professors were rated higher on the clarity scale while “hot” female professors tended to be rated higher on the helpfulness and ease scales when compared to their “non-hot” counterparts.

Lest one thinks that this information matters only to the eyes of the 18-22 year old crowd, it appears that at least one well-known entity, Forbes Magazine, uses RMP data to a substantial degree in compiling its college rankings list. But even more significantly than this, such data is an interesting barometer of yet another way in which college culture is responding to increasing demands to corporatize (and consumerize) the various facets that comprise higher education, even outside of the physical campus.

In the case of RMP, what I’m interested in considering here is the manner in which the success of its rating system depends on creating a culture in which various subjects who interface with the university are encouraged to use sexuality to barter for educational goods (including grades, status, and the like). Perhaps it goes without saying that the chili pepper measures something that should be immaterial to the educational process, but as the aforementioned statistics suggest, the university is hardly exempt from how the dynamics of appearance affect perceptions of workplace success. The goal of the chili pepper designation, then, is to openly invite students to objectify their professors, an overt power play if ever one has been seen.

This is a one-way objectification, of course, for, to reverse the scenario, I would never be permitted to publicly comment on my students’ appearances as a part of any sort of evaluative process. Moreover, what is terribly ironic is that the very sort of work environment created by the chili pepper is one where my body or appearance are immaterial to my job, but must still be pleasing in order to ensure the highest rankings of my job performance in that forum. At least according to the sexual harassment training that we complete at my university, this is dangerously close to a hostile work environment.

But even if we could pretend that it was all in good fun (an unfortunate excuse that rape culture awareness activists have been rallying against for years), RMP humorously but blatantly suggests that one might want to barter with one’s professors for a chili pepper in order to improve a grade. Here is one recent post from RMP’s Tumblr page: 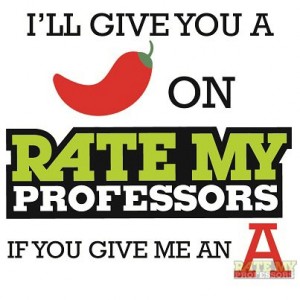 And here, consider the way that a chili pepper has become a verb on this t-shirt, in one of many RMP themed items available for sale on the website. RMP also sells several chili-pepper themed office supplies which are recommended as gifts to one’s professor so that everyone is clear where the professor’s pepper came from. The following is the t-shirt product description:

“Show your sexy English professor how much you appreciate her amazing lectures by rocking up to class in this hot tee. Trust us, she’ll notice.” 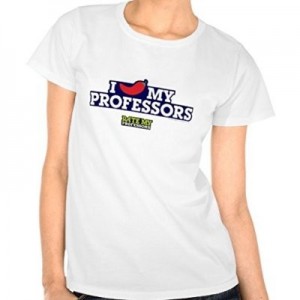 RMP insists that its website “does what students have been doing forever — checking in with each other… to figure out who’s a great professor and who’s one you might want to avoid,” and yet the manner in which it has manufactured and used the chili pepper symbol significantly changes the nature of the game. As someone who teaches about gender and sexuality (and as someone who has also overheard her students evaluating her appearance in class), it strikes me that the chili pepper is yet another interesting Foucaultian manifestation of the way that various social, cultural, and technological forces merge to create from a rather mundane event (that is, evaluating people’s looks) a phenomenon that is noteworthy precisely because it is has become one more public node in the network of identity and sexualized power.

2 Replies to ““If you’re not sexy, you might want to be easy”: Some Thoughts On Ratemyprofessors.com”