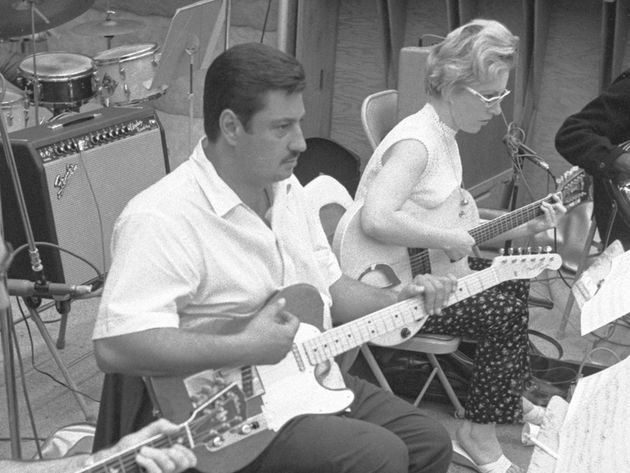 Like the recent documentary on the largely unknown session musicians associated with recording studios in Muscle Shoals, Alabama, a group that produced the sound associated with much popular music from the 1960s on, there’s an equally interesting 2008 documentary on a group of equally unknown LA-based musicians who appeared on countless albums, dating from the early years of rock and roll, but who also performed on a wide variety of other albums, movie scores, and TV themes songs.

Like the late, famed studio musician Tommy Tedesco (pictured above, with Carol Kaye) who played (among the many other well known songs) the iconic theme from this classic TV show:

So if you’ve not thought about the social actors behind things that we take for granted, then watch the trailer and use pop music as an “e.g.”:

All of these musicians were “unknown,” that is, to the general public but hardly unknown to the music producers, artists, and groups whose albums they not only made sound better but, in many cases, made — from the ground up. So it’s a fascinating documentary if you think that creating popular music — or any other item of culture, for that matter — is somehow the product of the lone creative genius who just pulls up his own socks and gets to it.

For if that’s your starting point — if, like plenty of scholars, you think social groups develop from the bold deeds of rugged individuals — then the film is pretty eye-opening. Because it turns out that such well known cases as The Monkees (an American Beatles-esque pop group formed for the sake of a 1960s TV show but whose hit music was all performed by uncredited professionals in the studio), or Milli Vanilli, (a late ’80s/early ’90s group whose on-stage lip syncing disaster marked the end of their career) are but the tip of an iceberg that touched virtually every part of popular culture in that era.

For such groups were hardly alone in performing their songs — simplified versions of their songs — only when they did their own live appearances (if, that is, they even did them live then, of course). For their hits were all actually recorded by the group of musicians known as The Wrecking Crew, performers whose names appeared on no albums, like Tedesco and Kaye.

So it turns out that the music industry is indeed a star-maker machine, like Joni Mitchell sang; it’s a collaborative effort of innumerable people, whether they’re credited or not, and we’d be mistaken to think that it’s rightly all about the one who is front and center singing the song — which is probably how all social life works, no?

(By the way, Neil Diamond wrote this hit for The Monkees.)