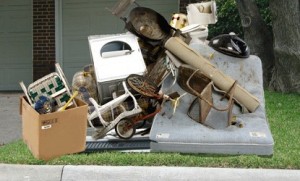 As I write this, “Large Item Pick-Up Day” has just passed in my neighborhood. Like in many other locales across the U.S., this is the annual event when our city’s trash provider names a particular weekend when large or bulky refuse will be picked up free of charge, including things like refrigerators, furniture, computers, old TVs, etc.

But culturally speaking, one could argue that this weekend is just as much about status enforcement as it is about getting rid of unwanted items, for at least in my neighborhood, most of the items placed at the curb never make it to the trash truck. While a few neighbors barter between themselves for each other’s trash, the majority of the refuse is hauled away by private citizens who – at least from appearances – occupy a different socioeconomic status than those of us living in the neighborhood. What this means it that “Big Trash Day,” as my family has come to call it, is a ritual that involves watching outsiders drive through our neighborhood on the day before the trash trucks arrive, taking whatever they deem valuable. This viewing practice is so much a part of the event that the picture on this year’s city flyer reminding residents of the date did not feature a heap of trash awaiting commercial disposal, but an old, beat-up pick-up truck belonging to a private citizen, filled to the brim with other people’s stuff.

It was the picture on this flyer that reminded me of Laura Mulvey’s now famous 1975 piece, “Visual Pleasure and Narrative Cinema,” wherein she argues, among other things, that the pleasure we take from watching others (Freud called this experience scopophilia) is a pleasure derived, in part, from seeing the presentation of certain power inequities. Mulvey’s specific argument addresses the gendered ways in which film scenes are shot and cut. For instance, when a beautiful woman enters a scene, it’s not uncommon for the camera to move slowly up her body from her feet to her head in a way that defines her as a sex object. The audience never has to be told this in any outright way; it’s obvious from the shot that the perspective represented by the camera is a male, heterosexual one, Mulvey argues. In this way, the male gaze is the lens through which the story is both narrated and literally viewed.

Although Mulvey’s point is couched in a much more specific context than I’m referencing here, her main concept is nevertheless applicable: we enjoy watching certain images because they reinforce specific notions of identity that the watcher (for whatever reason) finds pleasurable. I can’t help but consider how much Mulvey’s observations punctuate our annual trash ritual. Those of us with refuse place it on the curb and typically watch from the safety of our homes while outsiders pick it up. The watching is here intentional and has become a part of our neighborhood myth-making: we frequently tell stories about how quickly this or that item was snatched up (one year, an old dishwasher of ours was gone in 30 seconds – that remains our record), and there are often comments shared between neighbors about “the show” going on outside.

It’s here that Mulvey’s scopophilic perspective hones in on what constitutes “a show,” for watching other people go through your unwanted items isn’t usually the stuff of which epic movies are made. Rather, I suspect that the view is made interesting only insomuch as it occurs from the perspective of those who can watch from the privacy of their living rooms and whose livelihood doesn’t depend on rummaging through the cast-offs of others. We are interested, simply put, because we like to ponder the ways that our power is on display.