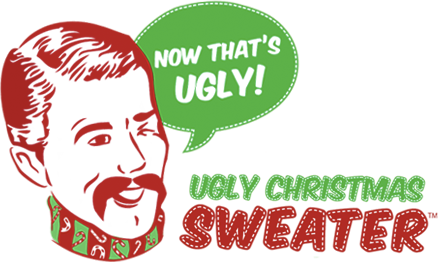 Several days ago, I was wooed to my local thrift store by their promise of deep holiday discounts. As I was shopping, an employee made an announcement over the loudspeaker that went something like this:

I happened to be one aisle over from that very sign and saw several older, presumably working class women shopping in that section, looking at one another with shocked faces upon their mutual discovery that what they had presumed was a fantastic deal on a nice holiday sweater was now someone else’s joke. Whether such a sweater ended up in their carts I do not know, but it was a very interesting examination of how certain types of defamation can be called “humor” while others simply remain defamation.

I’ve written elsewhere on this blog about the use of humor to cover up certain social inconsistencies that we need to make disappear so as to maintain a certain vision of the status quo. More specifically, humor helps us forget the very sketchy ways in which we apply the ethical standards that we often associate with “decent people.” The memory-erasing power of humor is important, for —  after all — if there are going to be jokes, someone’s got to be the brunt of them.

For instance, if asked, none of us would likely admit that it’s OK to make fun of someone, particularly someone less fortunate. And yet consider how ugly Christmas sweaters, “Bubba Teeth” (those fake crooked, decayed plastic teeth that are all the rage at Halloween), and the videos of Black Friday shoppers storming their local big box stores punctuate our holiday seasons. These are funny because, presumably, they are not us — not our clothes, not our teeth, and not our desperation.

Illuminating this point, you may have seen this particularly riveting story by journalist Sarah Smarsh, in which she describes the liability that “poor teeth” (also the name of the article) bring to their bearer, both in physical and social terms. Smarsh notes,

It’s become less acceptable in recent decades to make racist or sexist statements, but blatant classism generally goes unchecked. See the hugely successful blog People of Walmart that, through submitted photographs, viciously ridicules people who look like contemporary US poverty: the elastic waistbands and jutting stomachs of diabetic obesity, the wheelchairs and oxygen tanks of gout and emphysema.

Even though Smarsh’s specific point is to discuss the liabilities that accompany a certain physical sign of poverty, I am interested in the way in which such moments of humor at the expense of others seem to so closely intersect with various holiday seasons. Why the Bubba Teeth and racist costumes at Halloween? Why the Ugly Sweaters at Christmas?

I suspect that the answer has something to do the very sorts of solidarity that holidays were invented to create. If we learned anything from Durkheim, we know that the reason why groups of people engage in ritualistic acts is to create social cohesion — that is, being together-ness — a state that is dependent on distinguishing who’s in and who’s out of the group.  After all, most holidays celebrate some story, act, or event that defines one group as somehow quantitatively different from another. As Durkheim himself might note, the details of the story that the group tells about itself isn’t as important as the fact that it reminds the group of some element of its identity, an identity that cannot exist without a concurrent reminder of who they are not. Identity, then, is hardly about one’s own individuality, but where one — and one’s larger group — fits in the great pecking order of society.

So rather than conclude that I’m starting my own “War on [Ugly] Christmas [Sweaters],” my point is nothing other than that social cohesiveness often depends on distinction as a necessary precondition, and distinction is important only insomuch as it determines power relations. Even though Christmas, Halloween, and other such holidays are often described as “fun” and filled with a certain sort of “spirit,” perhaps sweaters and plastic teeth might remind us that power (as seen through distinction and classification) is, functionally speaking, the reason behind the seasons.