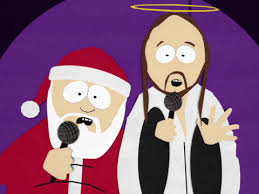 If you haven’t already heard, the latest news from FOX news correspondent Megyn Kelly is that Santa Claus must be a white man.  Kelly’s remark was prompted by an article written by Slate journalist Aisha Harris, wherein Harris pointed out how Santa’s constant depiction as a white man is a particularly powerful and, to many children in particular, damaging example of white normativity.  After speaking to a group of panelists about various facets of the issue, Kelly reassured the children of America that Santa (and Jesus, too) are white.  How do we know these things?  One of Kelly’s panelists remarked that Santa is based on none other than St. Nicholas, a white,Greek bishop.  In a equally problematic characterization, Jesus’ whiteness was claimed as a self-evident fact of history.

While Harris’s subsequent response to Kelly provides a rather simplistic theoretical treatment of race, her overall point bears repeating.  The main thrust of Harris’s comeback is that our most beloved figures — fictitious or not — are often nothing more than receptacles of our own cultural stereotypes, biases, allegiances, and norms.  From this, we can extrapolate that Kelly’s insistence on a white Santa (not to mention a white Jesus) – both claims that are either illogical, unproveable, or unlikely —  is really nothing other than Kelly completely missing her own implication in the processes by which dominant sub-cultures manufacture identities into the very things that they want them to be using whatever legitimizing means necessary (in this case, essentialist and historical claims).

For those of us interested in the construction of identity, Harris’s remarks are spot-on insomuch as they reveal the cultural mechanisms that transform the contingent into the natural.  But what I think is equally interesting here is the way that Harris seems to presume that debating the issue of Santa’s skin color is a somehow particularly large break with reality when compared to the big scheme of identity claims.  This may seem obvious, after all – because no one over the age of twelve believes in Santa, right?

While this might seem to be true on a simple level, it’s also a stunning misreading of how the very identificatory categories that most social groups invent depend quite heavily on the adoption of highly creative, if not logically outrageous, concepts that fuel the social machine.  For those who deny the historicity of Jesus, fretting over his skin color likely seems as ridiculous as worrying about whether aliens prefer granola over eggs for breakfast.  Think also of the tremendous power granted to “royalty,” itself a completely fictitious category that grants status to a certain group of people for reasons no one can quite pin down (beyond “the divine right of kings” argument, which brings us back to square one).  Or still yet, consider the way that so many products marketed to Americans are described as “European.”  Despite the fact that most folks drawn to such products likely have no clue what makes that product European – and perhaps may even be able to make fun of themselves for their susceptibility to such a marketing move! – they still willfully suspend reality to purchase them.

So what’s gone unspoken here is that, while Fox’s Kelly may look a little (or a lot) foolish, there’s not a necessary connection between logic and social sentiment.  Rather than dismiss this all as imaginary, let’s not forget that “imaginary” is not necessarily a synonym for “inconsequential”.  In the end analysis, believing in a white Santa creates social perceptions that create very concrete biases, votes, and laws, or in the case of Harris’s initial article, possibly millions of little girls who never feel quite good enough because of their brown skin. That the “imaginary” and the “real” are often just dimensions of one another is, perhaps, the most intriguing story of all.