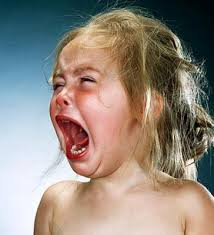 When my oldest child was still a toddler (and in that phase where she was old enough to say “no,” but still young enough to be completely irrational), I called my wise mother one night having a tantrum of my own.  I wanted her to tell me how to reason with my daughter – what to tell my precious offspring that would make her eat her breakfast,  separate from a beloved toy, or submit to a nap.  In short, I was asking for the holy grail of toddler parenting.

My mom’s advice to me was that, while I could not convince a toddler to willfully submit to anything, I could remain calm and use constructive parenting vocabulary (like “Use your words!” and any other number of advice-book platitudes).  When I asked my mother why I would bother with such things when my daughter clearly did not respond to them, her answer was simple: My words were not training my daughter.  My words were training me.

What my mom told me that night was, for all intents and purposes, very unhelpful in the moment, but turned out to be quite an effective lesson on identity.  The more that I spoke those words and at least pretended to remain calm, the more that I grew accustomed to thinking of myself as a competent, constructive parent. In other words, even before my kids understood the significance of what I was saying, I was willfully training myself to submit to a certain type of identity through shifts in my communicative content and style that, later on, became so habituated as to be second nature (or at least, second nature on a good day…).

The idea that language is a powerful chisel in the sculpting of social identity is at the center of Susan Harding’s claim that religious conversion – or any other sort of social identity shift – is not something that happens because of a change of “heart,” as we often describe it, but occurs, instead, because of a change of speech.  Harding argues that we actually begin to conceive of reality differently when we tweak the words that we use to describe events around us, even when we are fully aware of the baggage and history of those terms and/or when we deem ourselves immune to those terms’ impact.

For instance, one doesn’t have to look far in our culture to hear people wish one another well in hard times by offering their “thoughts and prayers,” or describing themselves in better times as “blessed.”  Whether or not the users of these terms themselves literally relate these words to a supernatural being and a well-developed theology isn’t so much the point.  What is likely more interesting here is the fact that such words create the ideological space through which religious concepts and ideas become so universal that they pass as inevitabilities — which all goes to show that sometimes the subtlest of speech can yield the biggest impact.