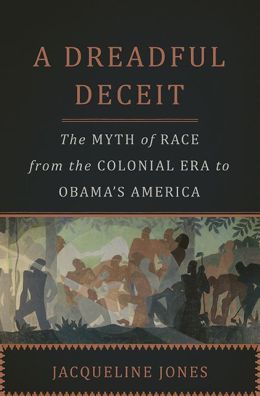 I caught an interview on the radio this morning with Jacqueline Jones, a history professor at the University of Texas at Austin and the author of a new book on “the myth of race.”

If you’re looking for a model of how not to talk about the social construction of identity, then this interview might serve as a good example. For like so many scholars of religion who are now interested in historicizing the word “religion” but who end up just looking for a new word to name the same old things that “religion” allowed us to talk about (i.e., they still end up studying Hinduism and Judaism and myth and ritual and, etc.), Jones’s interview makes repeated reference to the apparent naturalness of classifying ourselves based on skin color while trying to historicize the notion of race itself, leaving the impression by the end that we just need a new word for the “it” that we all somehow already know to be there.

For example, from near the start of the interview:

Jones: It is the most vulnerable people who do face this kind of oppression. It is people who lack rights and also who lack advocates…. He [i.e., Boston King] was a person of color, he had no rights. In colonial and revolutionary South Carolina. And so his labor could be appropriated with impunity. It was not because he was of a certain race, or a certain temperament, or because he lacked intelligence. It was because he was uniquely vulnerable among all these different groups during this period

Interviewer: Forgive me if this is, becomes a circular argument, but wasn’t he made vulnerable by the color of his skin?

Jones: Certainly that was a factor, and in some cases skin color became a stigma, of sorts, but there is a vast spectrum of skin colors represented in this region of the world. Some people are very dark skinned and free, some people are light skinned and bound laborers, as indentured servants were in colonial Virginia and elsewhere….

Now I’ve not read the book, but neither will the vast majority of people listening to an interview that was likely set up by her publisher’s PR team, suggesting to me that, with many people, this was her one shot at trying to complicate our understanding of this term “race.” But in this interview skin color seems to equal race, and is used here as a seemingly neutral descriptor (i.e., of course we need to know what color his skin was, right?), as if we always and already know to pay attention to it as opposed to seeing the very fact that we pay attention to it as evidence of the discourse on race at work!

Like so much talk of post-racial or post-Black America, then, it just seems so insufficient not to see the discourse on race (i.e., a way of organizing sets of assumptions about hierarchically-arranged groups of people based on seemingly shared, contingent features, such as anatomy) as that set of conditions — among other factors, to be sure — that made this fellow “uniquely vulnerable.”

Perhaps Jones should have subtitled her book The Myth of Racial Stereotypes, for that seems to be what she’s actually focusing on: a concern not to profile members of groups, while somehow knowing that different groups are already out there.