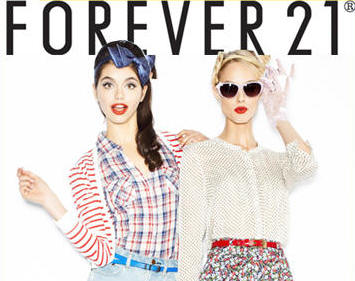 If you’ve traveled to an American shopping mall of any size, chances are good that you’ve happened across a store called “Forever 21,” which sells clothing and accessories geared towards (as the name suggests) the younger woman – or at least someone who wishes to look like how the store indicates a younger woman should appear.

The name of the store has always inspired mixed feelings for me. On the one hand, I like some of the clothing, and I’ve made jokes with the sales staff about how they should make a clothing line called “21×2” that would be more appropriate for those of us guilty of the crime of shopping while closer to 40 than 20. No one ever seems to find it as funny as I do.

All (bad) humor aside, though, I find the concept that 21 is a woman’s ideal age – as if there were such a thing – highly problematic on several levels. Practically speaking, most of us obviously don’t have the time, money, wherewithal, or connections to achieve most of what we wish by 21. While we may look back on our early adult years as fun and relatively responsibility-free, I imagine that much of this is the power of nostalgia at work. The majority of my 21 year old students, for instance, are naïve, cash-strapped, in tremendous debt, and are incredibly insecure about their future careers, relationships, and lives, in general.  In other words, asking someone if they’d really like to be 21 again (if not “forever”!) is, for many, almost akin to asking them whether they’d like to live in a perpetual state of junior high. It might seem kind of fun at the time, but only in retrospect does one appreciate how (comparatively) miserable it is.

This angle reveals the serious prejudicial potential buried in the claim that the age of 21 represents some sort of pinnacle in a woman’s life, and here the identity politics at play are more overtly revealed. Since relatively very few people really want to be “forever 21” for the above-mentioned reasons, some other important commodity besides age must be for sale. The obvious answer is that what’s really being marketed is sexual desirability (and ultimately, patriarchy): after all, what does a 21 year old female have that would make her want to hold onto that age forever? In the absence of financial security, wisdom, and connections, she has her sex appeal, her looks, her “beauty,” all things further authorized with the magic age that makes all of her pursuits under those auspices legal. Youth becomes a more domesticated and proper way to reference her sexual desirability which, it is presupposed, is her greatest asset.

While I admit that the analysis I’ve offered here is fairly obvious (for selling sex is one of the most ubiquitous practices ever), I’m more interested in the power of the symbolic “bait and switch” that makes it all happen. Put differently, I suspect that many identity claims operate by appearing to advocate for one thing when actually they’re talking about something else entirely. Remember that one of Foucault’s most basic arguments was that talk of sex isn’t really about sex, but the focus rests there because it is an expedient site through which to enact various forms of social control. We can find a parallel example in current workplace debates over “professionalism,” which are often not so much about the standards or merits of one’s work or demeanor, but can operate as a code word for discomfort over race and class differences. This also explains how the panics over homosexuality that our culture perennially resuscitates are hardly ever about the nature of the sex acts in question, but about who can be legitimized through the language of morality and “family values” that so heavily permeates American political talk.

Purchasing a blouse, then, can become something quite a lot more than adding a piece to one’s wardrobe. In this economy of both tangible and invisible commodities, it represents another way in which we both disguise and yet fully enable our most basic social forces.

One Reply to “The Fountain of Youth”