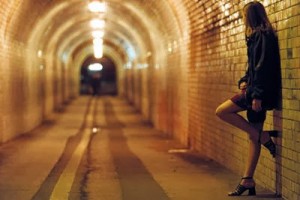 When we think of things that we encourage children to be when they grow up, “prostitute” is not typically on the short list, needless to say.  In fact, when I talk with my students about the social stigmas regarding sex, several of them not infrequently remark that telling their parents that they have committed murder would be more desirable than admitting to sex work.

While there are a multitude of different conversations that would be necessary to explore why we are so quick to demonize sex workers but simultaneously worship others who sell their sexuality (supermodels, anyone?), I am interested in thinking through the social story we tell that permits us to so easily separate and compartmentalize people when the topic of sex is at stake.

My own research interests focus on the manner in which sex and sexuality have been the moralistic lens through which Americans have legitimized their cultural worth. With that vantage point in mind, I am intrigued by Melissa Gira Grant’s book about sex work, Playing the Whore, in which she demonstrates that the social narratives we produce about a particular person’s identity can work to effectively blot certain aspects of that person off the social map.

Grant, herself a former sex worker, describes how very powerful stories about what “type” of people prostitutes are – and about the presumed dangers of sex work – are so pervasive that social advocates who fight against prostitution rarely consult with prostitutes to see if their experiences match these narratives. When they are occasionally consulted, the accounts provided by sex workers are often discounted if they do not comply with the dominant narrative that all sex workers are desperate, impoverished women with low self-esteem who are the victims of violence, abuse, and trafficking. For instance, there is little room in our stereotypes to acknowledge that some women choose this sort of work as a conscious, calculated economic choice, Grant notes; perhaps we are even further resistant to hearing that the most frequent form of violence many prostitutes encounter does not come from their clients, but from the police.

Grant argues that our voyeuristic interest in prostitution tells the public more about itself than it does sex workers in the sense that we construct our own identity in contrast; to further this point, she looks to the multiple reality media outlets that substantially profit from showing prostitution-related arrests. One such website, johntv.com, depicts average citizens who search out and record prostitutes with their clients. After turning the recorded evidence over to law enforcement, the footage is set to sensationalizing music and is posted online for all to see.

Grant is ultimately setting the stage for the argument that we love to watch prostitutes get caught because of the moral righteousness that we can assign to ourselves when we watch others break the sexual rules. Seeing how these rules are so much a part of how we determine social worth, power, and privilege, creating a unidimensional, composite prostitute stereotype provides an easy and fulfilling way to achieve a particular type of moral high.