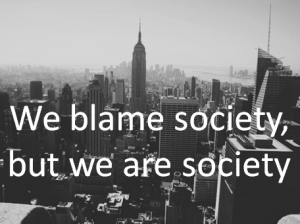 One of the most interesting ways that we talk about ourselves, in my opinion, lies in the ways that we think we’re not talking about ourselves. For instance, in the courses that I teach on gender, students constantly remark that “society tells us that women need to wear makeup and tight clothing to be perceived as beautiful” at the same time as they sit before me (in makeup and tight clothing) talking about both “oppressive” practices.

A similar issue emerges with a course I team teach on media and religion, where my colleague, a documentary filmmaker, spends the entire semester reminding students that “the media” is not an entity totally separate from their lives that produces completely foreign images and messages that are then forced upon an unwilling public. Rather, most media is usually a simple mirror, a reinforcement of what a culture already believes and thus delights in hearing or seeing again.

Lest we too quickly refer to this as a special brand of hypocrisy, consider for a moment that this is just a rather workaday technique of affiliation (itself an important form of power) that masks as mere description. Those familiar with Foucault might also think of his famous “diffused power” model, wherein he describes the reinforcement of social norms not as a process of top-down force, but as the simple transmission and self-inculcation of norms previously identified as desirable, good, or otherwise “normal.” Foucault also points out the power of anonymity, for when no one can actually trace the source of these popular claims, they become all that much more authoritative, “natural,” or “eternal.” In this sense, writing ourselves outside of big, uncomfortable narratives is just as common as writing ourselves into the more glorious ones.

We all know that when our country wins Olympic gold, we may tell friends, “WE WON!”, this despite the fact that not a one of us having that conversation may be able to stand on a pair of ice skates or dive without avoiding a belly flop. This begs the question of just how “the public” or any other anonymous social monolith is constituted, by whom, and under what contexts such identifiers operate.